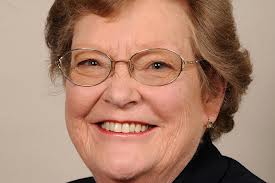 We are delighted to announce that the Countess of Mar has accepted an invitation to become a patron of The ME Association.

The Countess of Mar is an elected hereditary peer and a cross-bench member of the House of Lords where she has held a number of distinguished positions, including Deputy Speaker and Deputy Chair of Committees.

Outside parliament, she has held a number of positions including Chairman of the Environmental Medical Association and membership of the Immigration Appeal Tribunal.

She has devoted a considerable amount of her parliamentary time to pressing the government to provide suitable care and support to people with ME/CFS, as well as other long-term conditions. This has included longstanding membership of the All Party Parliamentary Group on ME, where she is the Deputy Chair.

Margaret Mar set up the Forward ME Group nine years ago to provide a transformational, unifying forum for all the major M.E. charities. This has successfully allowed us work together and speak with one voice in relation to benefits, NHS service provision, the NICE guideline, as well as taking forward the research agenda. The group, of which we are a member, meets regularly in the House of Lords.

She is also a farmer and former specialist goats cheesemaker in Worcestershire.

Her involvement with ME/CFS is described in her Wikipedia entry which describes how she became ill after sheep dipping with organophosphates in 1989 when she was splashed by the chemicals.

The Countess joins a list of distinguished MEA patrons:

HRH The Duke of Kent; Etain, Lady Hagart-Alexander; Professor Peter Behan, Emeritus Professor of Neurology at Glasgow University; The Speaker of the House of Commons and MP for Buckingham, John Bercow; M.E. specialist and author Dr Anne Macintyre; and the composer and conductor John Rutter.

MEA chairman Neil Riley commented: “The Countess of Mar is a brilliant campaigner for the cause and always a hard act to follow. We’re so pleased she has accepted our invitation to join the MEA as a Patron.”