From The Chester Chronicle, 20 May 2015. Story by Carmella De Lucia.

Did you know that May 11-17 was ME Awareness Week?

Chances are, unless the condition has affected you or someone you know, you probably wouldn’t have been aware of it, or even much about the illness itself.

So what is it? Myalgic Encephalomyelitis (ME) is a long-term and chronic fluctuating neurological condition that causes symptoms affecting many systems of the body, most commonly the nervous and immune systems.

It affects an estimated 250,000 people in the UK and many of its sufferers experience persistent fatigue or pain, yet there is much debate about its underlying cause, treatments and what does or doesn’t work.

Chronic pain, sleep difficulties, cognitive problems (including what is commonly called ‘brain fog’) and hypersensitivity to light, smell or sound are just some of the most common symptoms of those who suffer from ME, many of whom are women. 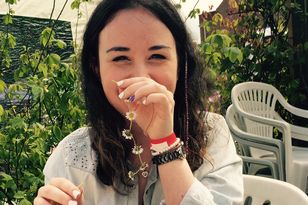 Sophie Lees from Wirral is one of these women, and despite being just 19 years old, the illness has afflicted her entire life, and she shares her experience here:

“ME affects a lot of women and young girls in different ways, but for me it affected my whole life,” she says. “It affected my hormones so I didn’t get periods for a long period of time.

“I also physically wasn’t well enough to keep up my appearance, and trips to the hairdressers were out of the question because I couldn’t sit up for that amount of time.

“I couldn’t do much for myself and had to rely on other people to do things for me, like wash my hair and make my meals.

“I couldn’t do any exercise because my muscles were so weak, I spent weeks in bed and lost all confidence in myself and my body. I couldn’t go out with friends or socialise because I was so exhausted all the time and I lost all my confidence which is really hard to get back and to deal with as I was once a fit and healthy young woman.”

Sophie added: “It was like constantly waking up in a dark cloud that surrounded you and pulled you down with every movement you tried to make. You never get a break, it’s always there, taking over your life and everything that you do.

“I know some other women who have ME and find looking after children so hard because they don’t have the energy to look after themselves let alone other people.”

Sophie, who works as a welfare officer for the Student Union at West Cheshire College in Ellesmere Port, has helped organise a special event at the college to mark ME Awareness Week in the hope of ensuring as many people know as much about it as possible.

“As part of the event we’re trying to re-create some of the symptoms of ME,” she explained.

“We’ll have a jacket which is filled with sand so when you put it on you feel so weighed down and heavy which is what it’s like to have ME.

“We’ll also be asking people to go in a wheelchair for a certain amount of time to see how much it affects what you can and can’t do, as well as hopefully shooting a video to capture this and to help raise awareness.

“It is a debilitating illness which affects so many people in the UK and really does change lives,” she added.

Sophie says she has also collected aspirations from sufferers which were written before they got ill and aspirations when they were at their worst.

“For example, one of these is: “My biggest aspiration was to do my A-levels and go to university.

“Now my biggest aspiration is to be able to stand up for more than a minute without blacking out.”

“I’ve covered giant letters in hundreds of aspirations and they’re really powerful because it shows just how debilitating and horrible this illness can be.

“I just want to try and raise as much awareness as I can, because it’s horrible enough having this illness but then on top of that, people still don’t believe it’s real and that makes it even worse when you have to battle against that as well.”

And Sophie also has a message to other ME sufferers:

“Just keep smiling, it’s the one thing you can do. That doesn’t cause any pain or tiredness. Smiling won’t make your health miraculously better but it will make your day brighter.

AND HERE’S THE VIDEO THEY MADE ABOUT M.E.