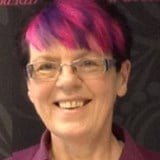 A former university professor, who has M.E. and loves running colours through her hair, is about to undergo an extreme haircut to promote awareness of the illness.

Christine Dancey, a psychologist who ran a chronic illnesses research group at the University of East London in Stratford, will go under the razor at her favourite salon in Capel St Mary near Ipswich on Thursday May 14.

The 63-year-old, who lives at Tattingstone, has asked salon manager Hannah De’eath at the Hair Ministry salon to shave her head, while leaving the coloured fringe in place.

“With just a bit of fringe left, it will look far sillier than it ever has but – if it raises a lot of money – it will be worth it”, she said.

Christine, who had to take a year off work when she came down with M.E. almost 10 years ago, ran a team of academics who for the best part of 15 years worked out ways to make life more bearable for people with a range of chronic illnesses.

M.E. – myalgic encephalomyelitis, otherwise known as chronic fatigue syndrome, which affects about 250,000 adults and children in the UK – was one of those illnesses studied. The causes are not yet known, and at present there are still no widely accepted treatments or a cure.

“It’s still in a place that M.S. was many years ago, little understood and vastly under-researched – a bit of a Cinderella illness,” said Christine. “But rapid advances are being made. We’ll soon have the answers”.

Christine took up singing after she retired and has had huge help with the fundraising from members of the choir to which she belongs – Yula Andrews’ ‘Pop Chorus’ at Kesgrave. “They’re a great bunch – some even offered to pay me money to leave my hair as it is. But I told them, ‘Sorry folks, it wouldn’t be fair to collect money NOT to do something’.”

Christine has set herself a target to raise £500 for the ME Association. If you would like to support her appeal, please visit her fundraising page at www.justgiving.com/ChristineIpswich/