From European Psychiatry, 1 August 2014. Abstract presented to the 22nd European Congress of Psychiatry in Munich, 1-4 March 2014.

Most people perceive their own future as more positive than the average person’s. This optimistic bias may be a concern if it leads to people misjudging health threats and therefore the need for taking preventative steps.

To investigate the generality of recent observations of a reverse, pessimistic bias (i.e., perceiving oneself to be more at risk) in people with Irritable E.

The aims are to discover if a pessimistic bias is also found in another psychosomatic condition (CFS/ME) or in another chronic illness (Asthma).

CFS/ME and Asthma patients were compared with healthy controls (matched in age and sex) for their perceived risks of health threats (e.g., arthritis) and threats (e.g., being burgled), for self and for others.

The results for the 3 groups are shown in the graph. 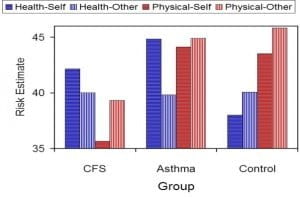 Chronic Fatigue Syndrome (CFS), also known as myalgic encephalomyelitis, is a complex multifactorial disease that is characterized by the persistent presence of fatigue and other particular symptoms for a minimum of 6 months. Symptoms fail to dissipate after sufficient rest and have major effects on the daily functioning of CFS sufferers.

CFS is a multi-system disease with a heterogeneous patient population showing a wide variety of functional disabilities and its biological basis remains poorly understood. Stable alterations in gene function in the immune system have been reported in several studies of CFS.

We found an increased abundance of differentially methylated genes related to the immune response, cellular metabolism, and kinase activity.

These data are consistent with evidence of multisystem dysregulation in CFS and implicate the involvement of DNA modifications in CFS pathology.