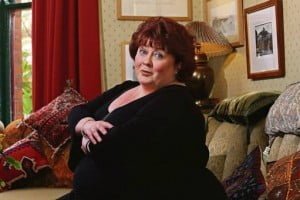 When a devastating attack of ME cut short her promising singing career at only 21, the Londonderry soprano fought back to become a woman of note, as she tells Una Brankin.

The Queen’s new representative in Belfast has a crystal-clear, tinkling speaking voice and the perfect diction befitting of a world-class soprano. She also has an open expressive face and an engaging manner that would have made her a memorable Mimi or Madame Butterfly.

But fate had a different path in store for Fionnuala Jay-O’Boyle CBE DL, the recently appointed Lord Lieutenant of the County Borough of Belfast.

At only 21, a severe bout of glandular fever wrecked her dreams of an operatic career.

“I got ill at a seminal point and it lasted four years,” she says.

“To sing, you need vocal health and physical health, stamina and energy and I had none. To lose four years at that stage was a bitter blow; I was just about to go the Conservatoire in London.

“I remember watching The Marriage of Figaro (Mozart), which is not a difficult opera, with tears running down my face because I knew I wasn’t ever going to be able to do this, but I kept up my contacts in the musical world. It has always been my passion.”

Unfortunately, the glandular fever left the chronic fatigue syndrome ME in its wake. But the 54-year-old government affairs consultant was determined not to let it beat her.

“I had a terrible strain of it and it recurred when I was 34 or 35 – ME wasn’t as well known at the time and the fatigue was dreadful, immensely debilitating,” she explains.

“You learn to manage it but I did have to work very hard to overcome that fatigue. I couldn’t go back to singing, but the passion remained and I became involved with Northern Ireland Opera. That does keep me very busy, but when you’re passionate about something you don’t mind being so busy; it doesn’t feel like work.”

Busy is an understatement. I’m lucky to catch her for 20 minutes on the phone, which she answers, incidentally, by reeling off the number first, in that charming old-fashioned way people used to do. As well as being vice-chair of NI Opera and a governmental consultant, Fionnuala is director of the Belfast Buildings Preservation Trust. It’s a cause so important to her, she stood outside her Ashley Avenue home off the Lisburn Road in her dressing gown after a sleepless night, to decry the demolition of Seamus Heaney’s former home next door – which began at 5.30am on May 22, 2002.

At her side was her husband, political science lecturer Richard Jay, whom she met at Queen’s University, Belfast, after she had graduated in history in the early Eighties. The couple’s 25th anniversary falls at the weekend when Fionnuala will be in Glenarm for the annual Festival of Voice, an unmissable celebration of classical singing which culminates in a Gala Final for the title of Northern Ireland Opera Voice of 2014.

To compensate, they celebrated in advance with a recent trip to La Scala in Milan, one of their favourite opera venues in the world and the artistic home of one of Fionnuala’s all-time favourite sopranos, Maria Callas.

“I almost need a little fix of Callas every now and then,” she enthuses.

“She was the consummate artist – opera is the ultimate art form; the whole experience takes over and transports you, and Callas understood that. She was the complete package. Magic …

“Oh, you must come to Glenarm to see our young artist, Giselle Allen, from Carrickfergus. She sang Visi d’Arte from Tosca just as well as Callas recently. There were a lot of tears in the room; she is a wonderful, singing actress. There is so much more to being an opera singer than singing – there’s the ability to communicate, emotional intelligence, point of connection with the audience. Giselle has all that.”

As well as a shared love of opera and books, the Jays are foodies and appreciate fine wines. They have a house in France; Richard is a descendant of the French Huguenots and is related somewhere down the line to Baroness Margaret Jay.

“Yes, I married into the firm,” jokes Fionnuala.

She has further strengthened her links with the establishment with her acceptance of her new Royal appointment, a role she takes over from Dame Mary Peters. The Lord Lieutenant job is something she could never have envisaged growing up in Londonderry in the Sixties, as part of a “very Gaelic” musical family who spent a lot of their time in Donegal.

The role was first created in 1900 and was held by the Marquess of Londonderry. Many of those who succeeded him were from the aristocracy; Fionnuala’s father worked in the travel and transport industry, and her mother was teacher.

At 54, she is one of the youngest ever Lord Lieutenants, and – as has been noted in the media – the first Catholic to hold the post in its 114-year history.

“I would rather steer clear of that; I don’t feel it’s significant at all,” she says of the coverage.

“You can’t proscribe the media for bringing it up but I don’t think it’s relevant at all, absolutely not. I’m really honoured, it’s very new and I’m very excited about it, and apprehensive in equal measure to be involved in public life.”

She has met the Queen in the past – so, does she reckon Helen Mirren’s Hollywood portrayal of her was an accurate reflection?

“I think it’s an unfair question; I’d rather not comment if you don’t mind,” she says without rancour.

“Her Majesty is Her Majesty. She is extraordinary, full of grace and elegance. On her last visit to Belfast, she lifted the city, which was wonderful to see. Belfast has been my home since I came in 1978 to read history at Queen’s and it has been very good to me. I’m passionate about the city and its buildings. And its people – it wouldn’t be what it is without the people behind it.”

An enviably high achiever, Fionnuala was only 36 when she was appointed to head the Belfast Buildings Trust in 1996. And at 54, she’s rather young to be holding the position of company director of Northern Ireland Opera. She has had no children to distract her throughout her career but her maternal side is evident in her dealings with young opera singers. She is also the chairwoman of the NI Schools Debating Competition and the founding Patron of Teachers of Singing in Ireland, the only cross-border organisation in Ireland for the professional development of singing teachers at all levels.

“The young people I work with are like a family, you become very protective of them,” she agrees.

“You share their joys and sorrows. There are a lot of pitfalls and disappointments in an operatic career too. My best advice to them is to be yourself – your integrity will shine through your performance – and to pick your opportunities carefully; particularly in a cut-throat world.

“Opera singers can be very hard on themselves and it’s so important to give them opportunities such as next week’s festival. There is a staggering amount of talent on Northern Ireland that we need to support.”

Ever gracious, she shows no bitterness over her own singing career being so cruelly cut short, agreeing that fate may have had a bigger role laid out for her. Under her wing, Northern Ireland Opera has thrived and provided many opportunities for young singers that are few and far between in the Republic. And there’s no better defender in the face of the upcoming Arts Council funding cuts.

“You know the older I get, the more I think, yes, maybe fate or some preordained path could have sent me off in a different direction. It would have been wonderful to have been a singer but I feel very privileged to make a contribution to opera here – it’s so civilising, so humanising, equalising. My ambition is to see Northern Ireland opera go from strength to strength – I would dearly love to see them on stage at La Scala one day. Wouldn’t that be wonderful!”