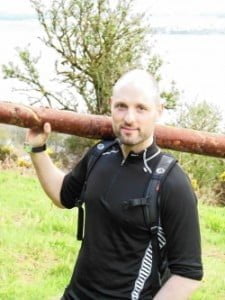 At its worst, Alan Goodwin (35) struggled to get out of bed for days at a time, crippled by muscle and joint pain, exhaustion, dizziness and depression.

After being diagnosed with myalgic encephalomyelitis (ME) — also known as chronic fatigue syndrome — in his late teens, Mr Goodwin’s health progressively deteriorated.

“Around 10 years ago, I was at rock bottom,” he recalled. “I had been unable to work for some time and spent my days alone either in bed or on the couch. My situation seemed so hopeless at times I questioned whether I even wanted to be here.”

Despite having a good relationship with his doctor, regular trips to his GP resulted in no more than a sympathetic ear and the offer of antidepressants.

But a vow to cut out anything negative from his life after one particularly low day marked a turning point.

Mr Goodwin revamped his diet, habits and mindset and set out on a path that led to a qualification in health and fitness and a new lease of life.

The road to recovery was a slow one, but the former Charleston Academy pupil now works as a fitness instructor for Bannatyne’s in the Highland Capital and is growing his own business running regular boot camps for everyone from beginners to health nuts.

“My condition still affects me and I have had a lot of setbacks,” he said.

“Living with ME is a terrible ordeal but it doesn’t have to mean the end, I’m proof of that. It got very bad. I lost my health, my fitness, my confidence and even my ability to think sometimes.

“But I came through it and I am managing it. I look after myself, I eat well, I stay positive and I have tried to cut out any negative influences so that the energy I do have is only spent on worthwhile things.

“For someone in my position it is essential to your survival that you try and enjoy yourself as much as possible and find things to look forward to each day.”

“I wanted to return to fitness training for some time and after seeing a group of footballers doing some cone drills on a beach I thought it looked fun. At the same time I had friends asking for advice on fitness and nutrition so I bought some equipment, designed a session and it got a great response, so it just went from there.”