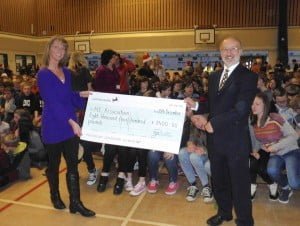 Going out on a high! As Christmas approaches, we were privileged to be at Wallingford School in Oxfordshire yesterday (December 20) where one of our trustees, Martine Ainsworth-Wells, received a cheque for £8,400.

The money was raised when the whole school – all 860 students and staff – did a nine-mile sponsored walk to a local beauty spot on July 12.

Martine is pictured with Colin Milston, head of IT at the school until his retirement in the autumn. Colin’s daughter-in-law Rachel has been masterminding a series of fundraising events for us since she became severely ill with ME three years ago.

“That’s Rachel’s Father-in-Law with me in the picture – we chatted a lot about Rachel who made some improvements during the summer and then has been knocked right back by a series of infections and illnesses ever since. She’s still bed-bound in her blacked-out room. There, by the grace of God, go I.

“It was humbling to meet her Colin, Steve Leeds and bead teacher Mr Willis and all the kids who had walked so far for us this year. They didn’t know how much they had raised until we revealed the giant cheque and there was a giant cheer.

“I thanked everyone very much and promised it would go into research, to help us find a cure and make life easier for people like Rachel.”

Rachel’s latest event is tomorrow (Sunday, December 22) when three of her relatives – husband Matthew, her brother and her brother-in-law – take part in the Portsmouth Coastal Waterside Marathon. If you would like to help them on their way, please visit Rachel’s online fundraising page at www.justgiving.com/doitforme

And a swim-athon is just round the corner the New Year. Absolutely amazing!