From the Cambridge News, 4 December 2013 (story by Eleanor Dickinson). 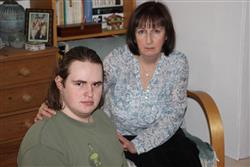 A desperate mother has launched a fight for her sick son’s chance to have an education after his illness forced him to leave school two years ago.

Jane Waters, from Arrington, has been at loggerheads with Cambridgeshire County Council since 2011, when her son Findlay found himself unable to attend St Ivo School, St Ives, due to severe chronic fatigue syndrome (CFS).

Mrs Waters and her husband Richard are facing the council at a tribunal today (Wednesday, December 4).

The 59-year-old said: “The council has failed our son. His illness means he cannot attend school and he desperately needs a tutor to come teach him and a computer with the right software so he can use distance learning to get the education he needs.

“To have to go to court to get these things is just ridiculous.”

Findlay, 16, began suffering from CFS in September 2011 after the whole family was struck down by a virus during the summer holidays.

Finding himself crippled with extreme fatigue, sickness and mental confusion, Findlay wasforced to drop out school completely by January 2012, despite his best efforts to keep attending. Now more than two years later, the once active teenager finds himself mostly confined to his bed and without any GCSEs.

“He is a very bright and intelligent boy. Before he became ill, he struggled with dyslexia and dyspraxia, and yet achieved a grade 8 in his maths in his Year 9 exams and was set to do 10 GCSEs.

“He really wants to study maths and physics at Cambridge University. But since his illness he has had no tuition in either of those subjects and has only been given 35 hours of tuition in English.”

Mr and Mrs Waters were facing County Council representatives at a Special Educational Needs and Disability tribunal in Cambridge yesterday in the hope of gaining a maths and physics tutor and the rights computer equipment so Findlay can get back on the educationaltracks.

“The council has offered appropriate tuition and continues to engage with the family to find the best way to meet their son’s needs.

“A parental appeal is being made to HM Court first tier tribunal and as such it would not be right for us to comment further.”