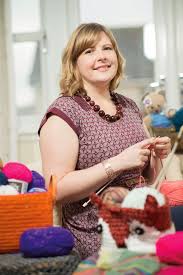 Teacher Louise Wilkie, 31, lives near Glasgow with her husband. Knitting has helped her to cope with serious illness. She says:

“Knitting has been my salvation. Two years ago, I was a busy teacher who loved playing classical guitar in an orchestra, competing in a netball team and meeting up with friends.When I first started to feel fluey, in December 2011, I thought I’d picked up a virus but couldn’t shake it off.

Then one day the following January, I collapsed in the staff room and spent three weeks in hospital. Eventually doctors diagnosed ME, the neurological condition also known as chronic fatigue syndrome. With no cure or treatment, they were unable to say if I would ever recover.

After six months off work I returned part-time – only to keel over again this year with endometriosis. Then, while waiting for an operation, my ME came back with a vengeance. It was as if my body was turning on itself.

Lying in bed, wearing an eye mask and wincing with pain, I sank into depression. Then I remembered my mum’s present from the previous Christmas – a knitting kit. I struggled out of bed to fetch it and I began to re-learn simple stitches.

My first wool square had so many dropped stitches that it looked like a mosquito net, but I was thrilled and went on to make a basic teddy bear. That’s holey too, but I treasure it.

Bad days still see me bed-bound and unable even to chew, let alone speak. But most days I still knit. I make little woollen hearts for friends or charity blankets for rescue dogs. I find it incredibly satisfying.

I have even set up the Little School of Wool on Facebook, and I love receiving compliments and ‘likes’. Eventually I’d like to sell my creations to raise funds for ME research.

It has been difficult for my husband David to see me so ill but I’m very hopeful of recovering. My next goal is to walk unaided.

Knitting has helped me to come to terms with my illness and to make the best of a difficult situation. I really appreciate the important things in life now like love, friendship, kindness and – of course – a good yarn.”

This was taken from a feature about knitting that appeared in ‘The Express’ Online on Sunday, 29 December 2013. Fiona Duffy interviewed four well-known knitters for a feature under the headline Purls of Wisdom: Meet the great British knitters.