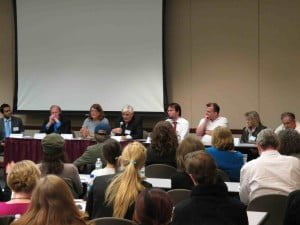 PRESS RELEASE: NEW YORK, NY (11/20/2013) – An untold number of New Yorkers, perhaps well over 100,000, who have been diagnosed with Myalgic Encephalomyelitis and Chronic Fatigue Syndrome (ME/CFS) could be at risk of relapsing and exacerbating their condition due to a course of a treatment suggested to them by the federal government, according to groundbreaking new research.

At a medical conference today sponsored by the New York ME and CFS Center at Mt. Sinai and held at the New York Academy of Medicine, researchers showed that a form of treatment called Graded Exercise Therapy (GET) which has been lauded by the UK’s National Institute of Clinical Excellence (NICE) and recommended by the U.S. Centers for Disease Control and Prevention (CDC) may not help ME/CFS, but actually can make it worse. Unfortunately, the CDC has long been touting that certain exercise regimens can help manage the disease, even offering guidance on their website.

Dr. Derek Enlander, Dr. Eric Schadt, Dr. Miriam Merad, Dr. Christian Becker and a team of researchers at Mt. Sinai Medical Center have discovered new research on ME/CFS that could change the way the disease is treated. Their research shows that the disease is tied to the immune system much more than originally thought. A recent study showed patients can actually relapse when they partake in excessive exercise, and other therapies maybe more effective.

“We want to raise awareness about this disease, how it affects the body and the best way to treat it,” Dr. Enlander said. “For too long, this disease has been misunderstood, leading to a poor quality of life for far too many patients. We hope to change all that.”

Myalgic Encephalomyelitis was first identified in the mid-1950s, by Dr. Melvin Ramsay of London’s Royal Free Hospital, after being suspected of outbreaks dating back at least two decades’ prior. What is thought to have been an outbreak in Nevada’s Incline Village in the mid-1980s, mirroring one in rural upstate New York’s Lyndonville, led to the CDC officially recognizing a condition reduced Chronic Fatigue Syndrome in 1988 following the elimination of the Epsten-Barr virus as a potential culprit.

The CDC has displayed an inconsistent track record ever since, diverting millions of dollars earmarked for research in the disease to other causes in a scandal uncovered some 15 years ago. Recent estimates suggest that hundreds of thousands of people in the U.S. suffer from CFS, although the CDC is thought to have both underestimated the severity of the disease, while overestimating the numbers, as they have reported a disease prevalence of 2.54% in the U.S. This figure is not accepted by experts in the field. Using the more-accepted figure of 0.4% would estimate the number of sufferers in the New York City Metropolitan area alone at over a half million patients, the majority of whom are likely undiagnosed.

The illness which afflicts women to a greater degree than men, causes severe immunologic dysfunction, profound loss of energy (sometimes referred to as fatigue, though in many cases patients would report that this term is inadequate as a descriptor), sleep disorders, neurological disturbances, pain, and other symptoms. Underlying causes and treatments for CFS have been elusive, but new research is shedding light on how the disease works.