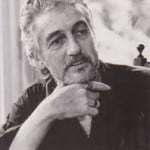 The prize-winner author, Deric Longden, who died in June at the age of 76, is remembered here by Kay Holt, former chairman of the Derbyshire ME Group.

Kay was secretary and newsletter editor of ME Derbyshire from 1966 and the group chair from 2003 to 2006 – while Deric was the group’s president. His first book ‘Diana’s Story’ told the story of his first wife who developed severe ME. It became the inspiration for the BBC film ‘Wide-Eyed and Legless’ which established his reputation for facing up to adversity with wit and gentle humour.

Deric was a regular broadcaster on Radio Derby and had a huge following of fans so when his first book ‘Diana’s Story’ was published in 1989 his interview on Radio Derby was trailed. Meanwhile Janet Warner had already been interviewed on Ashley Franklin’s programme (following Clare Francis’ public declaration that she had ME) and had told the listeners about our recently formed Derbyshire ME Group and so he rang Janet to tell her when Deric was coming to Radio Derby and invited her down to meet Deric, and I believe they took joint questions on a phone in.

This meeting had 2 results:

1. she asked Deric if he would agree to become our Honorary President

2. Janet was inundated with phone calls of people seeking more information about ME and hence our small group of 12 members suddenly grew and we were truly ‘on the map’.

Shortly afterwards Deric came to talk to us and, as a result of Radio Derby’s publicity, the main hall at the Chesapeake Centre was packed with a few hundred people as he talked about his caring for Diana and their difficulties in getting a diagnosis – not in a self pitying way but in his own inimitable way of engaging story telling.

He wouldn’t take any fee, not even petrol money, and so all moneys taken on the day greatly boosted our funds, allowing us to invite ME experts such as Anne MacIntyre to come to speak to us. I’m sure that having Deric as Honorary President of our group boosted our overall efforts of fund raising and awareness raising so by 1997 we had the confidence to invite The Derbyshire Constabulary Male Voice Choir to perform at a concert for us as a major fund raiser.

I’m sure that Deric’s name on the letter heading encouraged so many local firms to donate generous raffle prizes for the event, and gave us extra credibility when inviting local Mayors and Lady Hilton to attend. Therefore that night was instrumental in Lady Hilton becoming our Honorary Patron. Also, later in 199,7 Deric came to speak to the group again, giving a talk entitled ‘Cats and Other Things’ to a packed house, again raising our profile and funds.

In the year 2000 Deric again turned up trumps when he agreed to come to talk to a full audience of Derby Retired Teachers at their Annual Dinner and so raised another £550 for us at a time when our funds were depleted by our first Medical Conference. Then in 2003 Deric phoned me to tell me that he was coming to talk at the Assembly Rooms in Derby, and he agreed to let us fund raise during the interval and afterwards.

Just to give a more personal story about Deric, to give an idea of his warmth and caring nature – he was due to come to speak at one of our group meetings when he suddenly rang me to say he was terribly sorry he couldn’t come because he had to take Thora Hird on a plane to America because the TV programme ‘Wide Eyed and Legless’ had been nominated for an Emmy.

No mention that he as original author of the programme was also nominated! He said he felt really guilty letting us down, I said enjoy your great moment of well deserved triumph. He phoned me on his return, not to boast about his team winning, but to ask how the meeting had gone. Then he made me laugh by telling me how he had pushed Thora in her wheelchair to the airport check in, where she got uprated to 1st class because she was carrying the statue on her knee for all to see.

They hadn’t believed Deric that his award was in his suitcase and so he made the long return journey in 2nd class!

He also told me about the actual evening of the presentation, saying how they were hidden at the back of an enormous room but, once the announcement was made, Thora kept chiding him that he wasn’t pushing her up the aisle fast enough for her big moment!

He didn’t boast about it but whenever he needed to go to London he stayed with Thora, saying how her garage in London was more valuable than her house, and that he could even get his old Jag into it.

On another occasion he rang when I was having a terrible ME day, as I had a cold and sore throat. But he made me laugh by saying my croaky voice sounded very sexy and then the very nature of his chat soon lifted my spirits. He was always like that, showing his concern for others, cheering them up by his yarning and making them smile. He always showed an interest in our group activities and would phone me with his personal comments in response to his copy of the newsletter and its covering letter, and was really interested in keeping up with the developing news of the Steering Group Committee meetings which led to the foundation of the Southern Derbyshire CFS/ME Service.

He will be sadly missed, not only as a wonderful friend to ME Derbyshire, but as a very warm and engaging person who really cared about the welfare of others.