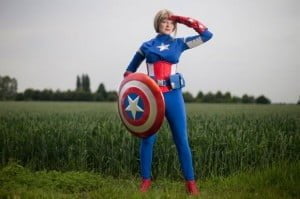 A teenager whose writing skills have secured her a three-book deal worth almost £100,000 with the publisher of the Harry Potter series has described how penning the novels helped to ease a debilitating illness that has blighted much of her life.

Lucy Saxon, 18, was diagnosed with myalgic encephalomyelitis (ME), also known as chronic fatiugue syndrome, when she was 12. She spent long periods away from the classroom yet left Bishop’s Stortford College in Hertfordshire with a clutch of A* grades at GCSE two years ago.

Shortly afterwards, she woke one morning with the vivid memory of a dream. Three weeks later, she had written Take Back The Skies, a 137,000 word fantasy book about a teenager called Catherine who, to escape from a planned arranged marriage, disguises herself as a boy and stows away in a smuggler’s airship where she discovers a world of excitement and adventure.

“You’re never really cured of ME, but I have found that my symptoms have been alleviated by writing and the satisfaction which comes with it,” she said. “I can also go at my own pace, which suits my body and the ME.”

Saxon, who began writing short stories when she was 14, entered Take Back The Skies into National Novel Writing Month, an online competition that offers no prizes but allows readers to post comments. The response was so positive Saxon asked her parents how she could get it published.

By coincidence, a keen supporter of Sheffield Wednesday football club, of which her father is chief executive, was Maggie Pearlstine, a literary agent and the partner of Lord Hattersley, the former Labour cabinet minister.

Saxon sent the book to Pearlstine, whose clients have included the politicians Robin Cook, Sir Menzies Campbell and Charles Kennedy, and she was impressed. “I didn’t look after children’s books but I was immediately bowled over,” the agent said.

Pearlstine convinced Saxon to reduce the book to 100,000 words.”I was miffed initially about the cuts as it was like my baby, but it did read better afterwards,” said Saxon.

Following a bidding way, Bloomsbury secured the rights to three books, the first will be published next year.

Saxon, who suffered taunts from some pupils that she was lazy rather than ill, says writing – she has almost finished the second book of the trilogy – has reinvigorated her life. “Things are not as bad as they were. When I was much younger, I was a keen tennis player and even represented my county at junior level. But I had to give up energy-sapping sports, though I’m now into horse riding, whivh I always loved,” she said.

Saxon is both Lucy’s nom de plume and her nickname. Her real name is Aldridge but she is known to many of her friends as Lucy Saxon, after a character in Doctor Who.

Saxon is not only a fan of science fiction television series such as Doctor Who and Star Trek but also of cosplay (costume playing), which involves people dressing up as characters from their favourite books, films and television programmes, usually to attend conventions. Her favourites are Captain America from the Marvel comics as well as Draco Malfoy and Remus Lupin from Harry Potter.