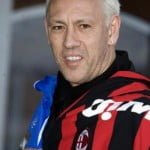 Former England footballer Mark Hateley and his son Tom – currently with Scottish Premier League side Motherwell – are raising funds for The ME Association.

Father and son will be climbing Britain’s highest peak, Ben Nevis, next weekend because Mark’s daughter and Tom’s sister Faye has had ME and fibromyalgia for the past eight years. Faye became ill when she was 17.

They are turning the climb into a family affair, with sister Lucy, cousin Adam Foyster and future sister-in-law Hannah Whittow all booking themselves into the assault on the 1,344-metre summit on June 7.

“Faye shows great strength every single day and we want to show we recognise just how brave and strong she is”, Hannah has written on the family’s online fundraising page: www.justgiving.com/climb-for-ME

“Our Ben Nevis expedition is a good 11 miles of trekking (up the mountain and down again) and will take approx seven hours.

“We may struggle, we may moan, we may ache – but we know it’s nothing compared to Faye’s daily challenge.”

Mark, who is known in the family as ‘The Gaffer’, played for Coventry City, Portsmouth, AC Milan, AS Monaco, Rangers and Queen’s Park Rangers during his soccer career.

He was capped for England 32 times – including games played during the country’s campaign for the 1986 World Cup.

The family’s fundraising is no mean shakes, either. They have exceeded their £800 target by 200% in the week before the climb.