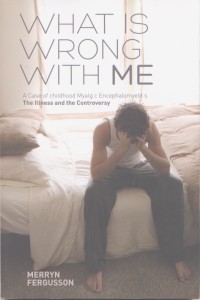 Unlike a novel or thriller, it feels good to reveal the ending right at the start. Chris Fergusson, who had been poorly since the age of nine and had missed years of school because of his ME, then got better. He’s now working as a freelance cameraman.

But that won’t ruin this telling of his story for the many hundreds of parents frightened by what’s happening to their children who have been struck by this awful illness.

Merryn Fergusson, mother of Chris and two other healthy sons, kept a diary of what was happening while husband Alex was busy being a Member of the Scottish Parliament.

The diary is at the heart of What is wrong with ME. It was kept on the hall table and Merryn wrote it up through three long years – when Chris was off school.

While he was ill, Chris hated the idea that it might one day be turned into a book and his mum was conscious that she might never be forgiven for exploiting him.

There had already been an incident when Alex, wanting a narrative to tempt the press to write about the setting up of the Cross Party Group on ME, had released a picture of Chris without his son’s permission. Chris found out when friends showed him a copy of the paper. He felt betrayed.

When Chris got shot of the illness, Merryn raised the subject again. Time heals; he gave in with good grace and a grin.

The book tells Chris’s illness story from the time when something happened to the muscles in his neck after he was banged on the back of his head by a football.

Dr Nigel Speight, the paediatrician in Durham consulted by the family, reckoned that was the prodrome – the early symptom indicating the start of a disease before more specific symptoms occur. The trigger for the onset of full-blown childhood ME, said Dr Speight, may have been something altogether more terrifying.

In 1996, the family were in their remote Galloway farmhouse when two men broke in. Son Dougal was watching TV, Chris, Alex and Merryn were asleep upstairs. Iain, the eldest boy, was away at the time.

Dougal was taken at knife point round the house for two hours while the men looted the place. Alex and Merryn were tied up. While Chris slept through everything, he was left traumatised by the enormity of the event.

“Chris began to sleep poorly and I would be aware, since I too suffered from disturbed nights, that Chris was standing on the landing outside our room too scared to move.

“On other occasions, he would be unable to sleep until we went upstairs, and then we would put him on a mattress at the foot of our bed.”

The book carefully traces what happened since then.

It details the family’s trawl round the complementary and alternative therapies they used and the people they met on route. There are also lots of commentaries by Merryn on what was happening to the family as a whole.

A must read – particularly about the propensity of youngsters to pull through everything and recover.

“What is wrong with ME: a case of childhood Myalgic Encephalomyelitis, the illness and the controversy”. Paperback, 168pp. ISBN 978-1-84530-126-2 Published by The Grimsay Press. Available from Amazon HERE