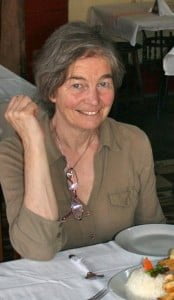 When Merryn Fergusson’s son Chris recovered from ME, she promised to do something to help raise awareness of the commonly misunderstood and often misdiagnosed condition suffered by thousands of children in UK.

A culmination of six years of writing and research, her book, ‘What is Wrong with ME’, is to be launched at the Catstrand Arts, Community and Visitor Centre, New Galloway, today (September 26).

Speaking at the launch will be Dr Nigel Speight, the only doctor who was willing to diagnose 14-year-old Chris, who is now 26.

For several years before his diagnosis, Chris suffered mystery symptoms. “He was about 10 when we started realising he was not well,” says Merryn.

“It kept coming and going but it really blew up when he was 14. He was sledging that winter, fell off and just could not get up.”

Merryn’s husband Alex, Galloway and Upper Nithsdale’s then elected MSP, attended a meeting in Parliament about the setting up of a Cross-Party Group on ME, at which he recognised what was wrong with Chris.

After that, the couple took Chris to see Dr Speight who recommended “Tender loving care and support and peace to get better”. It was three years before Chris returned to school.

“He was house-bound and, at times, bed-bound,” says Merryn. “They have brain fatigue. Some are barely able to read or talk. There is a massive medical controversy surrounding ME and, while the medical profession fights it out, patients are neglected.”

Merryn hopes her book will strike a chord with anyone who knows a child suffering from ME, therapists and carers.

Now a freelance cameraman, Chris, says Merryn, “is very very happy because, to him, every day is a gift.”

Any profits from the sales are going to ME Research UK, The Gateway, North Methven Street, Perth, Scotland.

Merryn’s husband, Alex Fergusson MSP, wrote this about the book in his regular column in The Galloway Gazette on Thursday, 4 October 2012.

What’s wrong with ME?

Before you get over-excited, this is not a question I am asking – it is the title of a recently published book. And it’s not just any old book, I assure you. It is the title of a book that Mrs F began some years ago and worked on while I was busy being the Presiding Officer of the parliament.

Regular readers will know that our youngest suffered from ME during his teens to the extent that he was virtually bedridden for two years. While I could hide in my work, Mrs F’s dedication to our son’s care was phenomenal, and it turns out that she kept a diary during that time.

ME (myalgic encephalomyelitis) is still something of a mystery, and it is not high up on the list of diseases that the medical research world seems to want to do much about, despite the fact it is the root cause of the majority of cases of long-term absence from school. In order to try to shed some light on this vile disease, Mrs F has combined extracts from her diary with factual explanations of various aspects of the disease.

The launch at the Catstrand in New Galloway was a complete sell-out, everyone who was there told me it was a huge success and I find that I am now married (very proudly) to a published author – good grief!

MERRYN’S BOOK CAN BE BOUGHT ONLINE AT AMAZON BY CLICKING ON THIS LINK. IT COSTS £12.95