Extract from an article which appeared in the Belfast Telegraph, 19 September 2012 (original story by Stephanie Bell).

An illness in her mid teens which led to her being taken out of school set new Northern Ireland author Rebecca Reid on the road to a career in writing.

Cut off from her friends at 14 due to the debilitating condition ME, Rebecca from Bangor turned to writing as a way of expressing herself and easing the isolation she felt.

Without that year at home, Rebecca believes she may never have discovered the passion she developed for creative writing and now at 29 and a mum to three young girls, she has just published her dream of publishing her first book.

And in what has also been a major coup for the writer, her debut novel enjoys the rare distinction of having its cover designed by internationally acclaimed local artist Neil Shawcross.

It is also a first for Shawcross who has never designed a book cover before and a huge endorsement for that is the first in a trilogy of psychological thrillers by the Bangor mum.

A former model, Rebecca is married to Johnny (27) who recently graduated from Queen’s with a degree in archaeology and they have three girls aged five, two and eight months.

Rebeccas studied English at Queen’s and it was during a creative writing module in her final year that the ideas for her trilogy took root.

With the help of an individual artist grant from the Arts Council of Northern Ireland, she managed to complete her first novel after her first novel was born and wrote books two and three of her Thickets Wood series when pregnant with her second and third children.

It all started when she was knocked off her feet by ME at 14.

She says: “I had never been interested in writing before but when I was ill it became a vent to allow me to express myself. I was too ill to even have home tuition and I think not seeing my friends or going to school left me with no other way to express myself.

“I had to find a vent and so I started to keep a journal and wrote poems and short stories and discovered I really enjoyed it.”

With no treatment for ME, Rebecca’s parents explored holistic therapies. She received weekly Thai massages to keep her muscles and ligaments healthy and took herbal medicine which she believed helped put her on her feet again.

She went on to complete her GCSEs in one year and studied A levels at Bangor Technical College before going to Queen’s to study English.

At 16 she approved her local paper and was given a weekly column writing on topics of interest to teenagers. At 17 she started to model -art-tiome but it was writing which really fulfilled her.

She says” “At Queen’s there was a creative writing module in my final year which was part of the course I had been waiting for. The piece I wrote for that completely transform the seed of what was going to become my first novel.

“I just realised there was something in it”.

In the meantime, she met, fell in love with, and married husband Johnny within six months and very soon afterwards started a family. After extensive research, she opted to self publish as an e-book in the hope that her work might be picked up by a major publishing house.

She says: “There is such mass input in the literary market that I think now you need to prove yourself with an e-book before a publisher will touch you.

“I think my books offers something different. It is not what you would expect it to be and people will hopefully be surprised by the way it goes.

“I have written the books in such a way that you could pick up book two and enjoy it without reading book one but as a trilogy book two provides a lot of answers to questions raised in book one”.

Rebecca is thrilled to have Neil Shawcross on board to design the cover.

A huge fan of his work, she said she knew even before her first book was finished that he would be perfect.

She adds: “I chose Neil because his style felt entirely right for these books. His creations can be almost gothic but yet enticing in their simplicity, I spent a lot of time researching cover art, both European and America, and luckily Neil’s style was perfect for both markets.

Luckily for Neil, Neil readily agreed to her request, He says: “This is the first time I have created an image inspired by actual text.

“I started reading The Coop and the images came to me – no problem at all.” 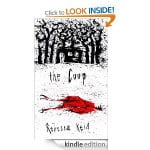 ‘The Coop’ can be downloaded from Amazon The cost is £2.56. Rebecca will be answering ‘Ten revealing questions about your illness’ in the November issue of the ME Association’s quarterly ME Essential magazine.