INTREPID cyclist Richard Hazlewood has completed a 300-mile bike ride from London to Amsterdam and Brussels, raising more than £2,000 for the ME Association.

Richard, who until recently was Special Adviser to the Secretary of State for Wales, embarked on the four day challenge after his wife Rachel fell ill last year.

This is the second long cycling challenge Richard, who lives in Cardiff, has undertaken. In 2010 he rode from London to Paris in aid of the Kidney Wales Foundation.

The ride to Brussels took Richard and 17 other cyclists from east London to Harwich in Essex. After catching an overnight ferry the group made its way north to Amsterdam, before heading to Brussels via Breda in Holland.

Speaking after returning from Brussels, he said: “This was a very personal challenge due to Rachel’s illness. Raising money for the ME Association and raising awareness of ME and CFS spurred me on to put in the training and during the ride, particularly when the going got tough due to bad weather.

“Having seen at close quarter the impact of ME on someone I know just how fortunate I am to be able to fulfil a challenge like this and to consider doing more in the future.

“I hope that in my own small way I’ve been able to raise awareness of ME and CFS among family, friends and colleagues and promote a better understanding of the daily challenges facing people with ME and CFS.”

Richard intends to continue taking donations until the end of October. If you wish to donate you can do so at www.justgiving.com/Richard-Hazlewood You can continue to follow his cycling exploits via Twitter at @rjhazlewood 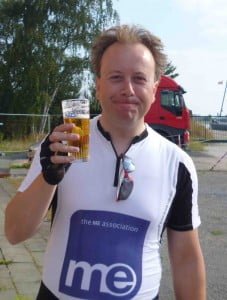