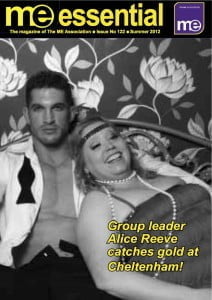 LEFT: The cover of our latest issue of our ME Essential quarterly magazine, Copies are posted to every member of the ME Association.

Acne treatment and ME, including Roaccutane (Autumn 2011)

Antibiotics – are they safe for people with ME/CFS? (April 2008)

Sickness certificates from a GP (Spring 2011)

Contagious – is ME/CFS? Can it be passed to other family members (July 2008)

Drugs, including statins, that can cause muscle problems (November 2008)

Employment: should I tell my employer that I have ME/CFS (Spring 2011)

Epidemiology – how many people have ME/CFS (Winter 2012)

Headaches – use of amitriptyline (Spring 2011)

HIV/AIDS – as part of the differential diagnosis (Spring 2011)

Inherited – can ME/CFS be passed on to other family members? (October 07, p13)

Medical Research Council – why are they so reluctant to fund biomedical research into ME/CFS? (July 2008)

Still being able to donate other body parts (Spring 2011)

Sleepiness during the day (April 07)

Thyroid function and ME (Spring 2009)

Weight gain and how to lose weight (October 07)