‘Dolly and ME’ by Maureen Coleman 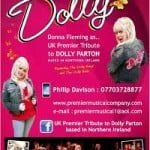 WHEN Donna Fleming steps out onto the stage as her effervescent alter-ego, the Queen of Country Dolly Parton, she comes to life. wearing a platinum blonde wig, sequinned gown and sky-scraper heels, the pint-sized singer quips in a Tennessee drawl: “It takes a lot of money to look this cheap”, before belting out songs like Jolene, 9 to 5 and I Will Always Love You.

The audience is certainly appreciative. One woman comments: “She has Dolly down to a t.”

What they don’t know, however, is that this performance will wipe Donna out. She will now take to bed for several days to recuperate. Her bones will achene, her appetite will disappear and she’ll have intermittent memory lapses.

Donna (41) suffers from ME (Myalgic Encephalomyelitis), a fluctuating neurological disorder caused multiple symptoms. The Ballynahinch woman, who has two children, aged 14 and 12, reckons she spends over 70% of her time confined to her bed, exhausted, unable to concentrate and in pain. It is, she tells me, a “wicked, evil, debilitating illness”, robbing her of the boundless energy she once had and of precious moments with her boys.

But she’s a firm believer in ‘the show must go on’ and says she will continue to perform as Northern Ireland’s leading Dolly Parton tribute act, despite the condition. She may have to take to her bed in the run-up to a performance and afterwards as well, but Donna maintains it’s worth it.

“I love performing. And the way I see it is that I would be wrecked anyway and in my bed, even if I wasn’t doing a Dolly show,” she says.

“I go onto various forums to talk to other ME sufferers, and it’s so, so sad. For some of them, it’s their lives. It’s all they have. I don’t want to be like that. It’s an awful thing to say but I’d end up dead if I thought my life was just all about ME.

“The cruellest thing is my mind is still active, it’s just my body that isn’t. And yes, I’ll suffer after a show, I’ll feel like I’ve been hit by a car. But I just have to perform.”

Before Donna was struck down with ME she was a regular gym-goer, swimming every week. She was also an all-dancing, all-singing performer, tutor and actress. Along with a friend Emmanuel McStravick, she set up Premier Musical Company, to train budding young performers. Donna produced, co-directed and took principal roles in many of the company’s productions.

She also married Johnston, a trainer from her gym, and the couple went on to have two sons, Scott and Jack. And she was also working as a vocal coach. Looking back, Donna admits she had a lot on her plate.

“In 2007 we put on a production of High School Musical,” she recalls. “I co-directed and produced the show, I was vocal coaching every spare second that we weren’t in rehearsals and I had two young children, aged seven and nine, to look after.

“It was a mammoth task doing everything the same time and I guess it took its toll. I could feel myself getting tired and thought I was coming down with flu.

“For the first time ever, I missed a production night. But I remember feeling awful, sore all over, exhausted, just utterly wiped,” she adds.

“I went to the doctor and was told that I had flu. I was advised to drink plenty of fluids and rest up. I didn’t know much about ME, I’d heard of it and never thought for a minute that it might have been that. I just presumed it was flu.”

However Donna’s symptoms dragged on for many weeks, then months, prompting regular visits to the doctors. Blood tests showed up no abnormalities.

One doctor told her to try gradual exercise. But this only exacerbated her condition.

“I started walking for five minutes one day, then five more the next, then the following day I was up to 20 minutes.

“By that time I was so tired I had to take to my bed for two weeks and I developed restless leg syndrome,” she said.

“I later found out that this is the worst possible advice for someone like me. I felt so frustrated. I was continually ill and this from someone who had never been sick a day in my life. I felt that I was getting nowhere, that no one understood.

She added: “And, yes, there were doctors who would say it was all in the mind, that ME didn’t really exist. They don’t say that now though. The medical profession accepts that ME is a recognised condition but, even now, some GPs need to be better informed.”

Donna finally found a doctor who diagnosed her illness – four years after it had struck.

“I did feel a sense of relief when I know what was wrong with me.” she says. “But I was also so annoyed at myself, typical that I had to go and get such a complex condition.”

Over the years Donna has tried various methods to improve her situation, site supplements, herbal remedies, ginseng and magnesium.

Her husband, she says, is her rock, providing much-needed support at home with the children. They work as a team to ensure the boys don’t miss out too much.

“Some days I’m too ill to cook their dinner,” Donna says.

“And I have great friends who understand when I don’t turn up at their birthdays or any social occasions.

“If I even attempt to take a drink, I’ll just end up vomiting. It’s not worth it at all.”

What she won’t give up though its performing. Instead, Donna has found a way around it. Premier Musical Company has grown and continues to train young performers. Its sister company, Prem Events, boasts round 15 tribute acts at any one time.

Once a week, Donna oversees the rehearsals, vocal coaches the tribute acts and also practises as Dolly Parton herself.

“I have worked out a system now,” she says. “I have a PA and event manager, Philip Davison, who does everything I used to do but can’t do any more. I couldn’t do without him.

“I do everything on a Sunday and by night-time I completely floored. But that’s just the way it is.

“If I go out during the week, shopping with my mum or something like that, I have to take to my bed.

“But I really feel like I was born to perform. Although I’m so proud of my performers and staff, I missed the whole performing side of it myself. I knew there was no way I could perform regularly.

“So I decided to become a tribute myself. That way I can pace the bookings. And I would never let down a client who has booked Dolly NI”

Before a gig, Donna takes to bed and then again, once the show is over. It’s a frustrating way of life, but she is determined the illness is not going to beat her.

“I don’t know if they’ll ever find a cure,” she says. “People seems to be able to manage it and improve.

“But there are simple things I used to be able to do that I can’t do now. I can’t exercise. I can’t have a telephone conversation, it tires me out. I can’t drink. Johnston has to drive me sometimes. And I can’t take my boys out on little adventures any more.

“I feel like I’m letting then down, but I know they understand.”

Northern Ireland has around 7,000 sufferers whop keep in touch via Facebook groups and a support organisation, which meets at the Emerald Road House, Finaghy, on the first Tuesday of every month.

At a recent meeting on ME, held at the Lansdowne Court Hotel Belfast, DUP MLA Jim Wells was accompanied by Dr Derek Enlander to highlight the issue. Dr Enlander, who was born in Co Tyrone, now works at the Mount Sinai Hospital in New Year, specialising in ME and fibromyalgia.

Donna says: “The organisers were expecting around 100 to 200 people, but there were over 500 there, which shows that there is a need for support and information.

“The Northern Ireland ME Association is getting information packs out to doctors’ surgeries here but I still think there needs to be better awareness and understanding, as well as a specialist clinic here.

“There are a lot of people out there who just don’t understand what it’s like to be struck down but ME or who might wonder what I put myself through the performing when I feel so bad. But I have to. I can’t let my life be just about ME.

“I see people on forums whose lives are controlled by it, who maybe have no contact with others except through those forums. I never want to be like chart.

“I am very passionate about raising awareness about ME and jumped at the change to donate my time for the ME Extravaganza Gala at the Emerald Road House on Saturday, May 19. The more the public understands this evil condition, the better. Of course there are days when I feel really low and angry that it had to be me, but there are others to there who are a lot worse than me. Yes, it has crushed me, but I’m going to keep fighting it.”