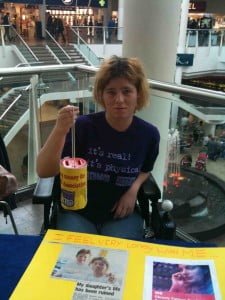 I’m replying to the article about ME (Living the dream – until ME struck, May 14), as I also suffer from the illness.

I am 22 and was diagnosed with ME in June 205 but doctors think I have had it since the age of eight or nine. ME is not a well-known illness as a lot of people seem to ask what it is.

Since my diagnosis, my health has worsened so badly that I have got glandular fever again. Next month, I will have had it for nearly a year. The doctor had to go on my symptoms as I had four attempts at blood tests which all failed. I have glandular fever many years ago before my ME was diagnosed but at the time I didn’t know I had it. It was only when we received a letter from the doctor that I learnt they did an extra blood test and it was positive. Glandular fever seems to be very common before ME is diagnosed.

ME can last for many years but family members seem to think that I have had it for too long and that it should have gone by now. It’s not like that at all.

We have to pace ourselves but then at at the end of the day we will still feel exhausted.

This is the symptom I hate the most. I feel tired all day every day, no matter how much sleep I get. I would love to sleep all day if I could but then I would get nothing done and wouldn’t enjoy my life.

When ME sufferers get new symptoms, we can’t just assume that everything is down to the illness.

The thing I hate the most about having ME is the fact that nobody seems to care about me. I have barely any friends at all and that makes me so sad that I want to cry. I do have a couple of friends and I am so happy to have them as they really cheer me up. I wish I had more friends but, as I left school at the age of 14, people have lost contact.

Even so, my diagnosis came as a huge relief as then I knew what was wrong with me. I won’t want anybody to think I am pleased to have ME; I absolutely hate it.

I am willing my health to improve but the one thing that delays one’s recovery is stress. Stress is the last thing as ME sufferer needs. I am longing to start driving but at the moment I am so poorly it is totally out of the question.

As if the ME and glandular fever weren’t enough, I almost certainly have an under-active thyroid; proof that things do happen in threes.

It hasn’t yet been diagnosed but for the last eight weeks I have had six failed attempts at blood tests.

I am a difficult case with blood tests but going through so many attempts just shows how poorly I really am.

The doctor is sending me to hospital for attempt number seven this week, which I’m praying will be the last one for now. I am sure that the doctor wouldn’t be testing me for it unless she was positive that I have it.

No ME sufferer has the same symptoms but I have to use a wheelchair.

People think I can walk but actually if they knew me at all they would realise that however little walking I do I am exhausted afterwards.

I wish there was a blood test for ME but at the moment there isn’t.

More awareness of ME is needed and the more times ME is in the papers the better.

There are many sufferers going through the same thing as me and I would like them all to know that they are not alone.

I am feeling very lonely and so I know what it’s like. ME is a horrible illness to have and we all need to fight this together no matter what.