From the Western Morning News, 24 February 2012 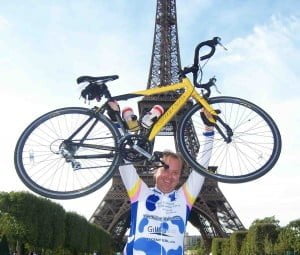 Welsh Secretary Cheryl Gillan’s special adviser Richard Hazlewood is going on a 300-mile bicycle ride to raise money for charity after his wife Rachel was diagnosed with ME.

Next September he will ride the 300 miles between London, Amsterdam and Brussels in aid of the ME Association, an organisation which supports people with chronic fatigue syndrome. His wife was diagnosed with ME in September.

This is his second cycle challenge. In 2010 he rode from London to Paris in support of the Kidney Wales Foundation.

It is estimated that around 250,000 people in the United Kingdom, including around 11,000 in Wales, are affected by ME. The cause of the illness is uncertain, but common symptoms include severe and debilitating fatigue, painful muscles and joints, disordered sleep, gastric disturbances, and poor memory and concentration.

There is no accepted cure and no universally effective treatment.

According to the ME Association those treatments which have helped reduce particular symptoms in some people have proved ineffective or even counterproductive in others.

“It’s incredibly hard to watch someone go through ME. You feel helpless and very frustrated,” said Mr Hazlewood.

“We both find we’re adapting our lives to deal with ME. Until recently Rachel was fit and healthy, worked full-time, and led an active life. Now there are days when for Rachel walking or getting out of the bed in the morning are a challenge.

“I know there’s not much I can do to make it better other than to just be here.”

He added: “Like many people, until recently I knew little about ME. In the coming months I’m determined to do my bit to raise awareness and improve people’s understanding of this terrible illness. The best way I know how is to get on my bike.

“As well as London-Amsterdam-Brussels I hope to complete a few shorter rides before September if time allows. I know that for me the fatigue will be temporary and I have to remind myself just how fortunate I am to be well enough to do something like this.”

Readers can contribute to the challenge at www.justgiving.com/Richard-Hazlewood