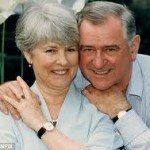 The actor, George Baker – who Ian Fleming recommended for the part of the original film James Bond – has died of pneumonia at the age of 80. His death follows shortly after that of his third wife Louie Ramsay, daughter of one of the founders of the ME Association, infectious diseases consultant Dr Melvin Ramsay.

They had both been patrons of the ME Association for many years.

George starred as Chief Inspector Wexford in the TV series ‘The Ruth Rendell Mysteries’, with Louie playing alongside him as his wife Dora. He also appeared in a large number of films such as ‘The Dam Busters’, the TV series ‘I Claudius’ and in recent years had character parts in television’s ‘New Tricks’, ‘Spooks’ and other series.

We shall be sending our condolences to the family next week.

There’s an obituary on the BBC News website, with a large number of comments already added. Typical is Jerry’s remark: “A true English gentleman, they don’t make them like that anymore.”

For The Guardian’s obituary of Louie Ramsay, please click HERE.