Ringing in the ears, or tinnitus, can be so annoying that a person with it can’t sleep, think or work. It’s a common problem for veterans returning from Iraq and Afghanistan. But tinnitus can also start for no apparent reason. That’s what happened to Mark Church.

He went to the dentist for a routine visit 11 years ago, and soon after had an annoying buzzing sound in his ears. The doctor said he had tinnitus.

About 50 million Americans have tinnitus, but Church is among the 2 million with severe symptoms. “I was having panic attacks,” says Church, now 50. “I couldn’t sleep at night. I lost my appetite. I was losing weight.”

The sound was so disruptive that Church had to take a leave of absence from the software company he owns in St. Louis, Mo. “I just could not sit through business meetings,” he says. “I couldn’t carry out my responsibilities. I couldn’t think clearly.”

A Problem In The Brain?

For a long time, doctors thought tinnitus was a problem in the ears. But they now think it’s more of a problem in the brain. In the past 10 years, brain imaging has given clues that the tinnitus “sounds” may be caused by a brain that is not connecting its various sections clearly.

Jay Piccirillo, a professor of otolaryngology at Washington University in St. Louis, is trying to reset those brain connections by holding an electromagnet to people’s heads.

“We think that perhaps that electrical stimulation just clears away that pathological, or that faulty, connection,” Piccirillo says, “with the hope that the reconnections are more normal and more healthy.” 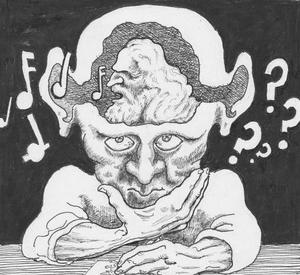 Mark Church decided to try transcranial magnetic stimulation as part of a clinical trial run by Piccirillo. The two-week trial of daily transcranial magnetic treatments found no improvement in participants, and Church dropped out of a second, four-week trial because he thought it was making his tinnitus worse. Piccirillo is analyzing the results of that second trial to see if any patients benefited. He’s also conducting a study of military members deployed to Iraq and Afghanistan, doing MRI scans of their brains before and after deployment.

The Defense Department is giving a big boost to tinnitus research. That’s because 20 to 40 percent of soldiers returning from Iraq and Afghanistan have tinnitus due to hearing loss caused by exposure to loud noise from gunfire, aircraft or explosions. It is now the most common service-related disability, with 744,000 vets receiving compensation for tinnitus, according to the American Tinnitus Association, an advocacy group.

The fact that so many veterans have tinnitus after being exposed to loud noises has made it clear that even if tinnitus isn’t generated in the ears, hearing loss is often involved.

So some scientists are trying to retrain the brain to quit paying attention.

A Pacemaker For The Ears

Michael Kilgard, a neuroscientist at the University of Texas in Dallas, is experimenting with vagus nerve stimulation, a therapy used to treat epilepsy and severe depression. A pacemaker-like device is used to send tiny jolts of electricity to the brain via the vagus nerve in the chest.

Kilgard says that instead of having too many neurons listening to one tone — the tinnitus frequency — the treatment redistributes the resources evenly. “But trials with humans are just starting, so relief will be years away, if it works at all,” he says.

The Web is awash with untested tinnitus “cures,” many of them expensive. Church found his own cheap, simple workaround, suggested by his wife: radio static. One evening when he was tormented by tinnitus, she gave him an inexpensive personal radio and told him to put on the headphones.

“So I put it on, and I turned it on, and I put it between stations — immediate relief. Oh, my God, this is amazing. I went from being a basket case to being able to function for the rest of the evening within minutes.”

Now, Church says, he’s able to largely ignore the tinnitus at work, and turns to the radio static for relief in the evening. It’s a lot like living next to an airport. “When you first move in, you hear the planes go over every day. But after you live there for a while, you figure that noise is not important to me. ‘Cause the planes are going to continue to come, they’re not going to crash into my house. It just happens to be where I live. So before you know it, you don’t hear the planes anymore.”