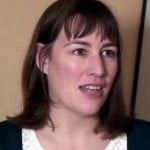 The latest book by Dr Who spin-off author Jacqueline Rayner will be treated to a massive print-run following the announcement that it is one of eight titles selected for next year’s ‘Quick Reads’ – a literacy scheme run out in libraries, schools and bookshops round the UK.

‘Doctor Who: Magic of Angels’, written by Jacqueline, is expected to have a print-run going into “hundreds of thousands” of copies, according to the Quick Reads office this morning – after the list was announced in ‘Bookseller’ magazine last week. The actual number of copies to be printed will be down to BBC Books, Jacqueline’s publisher.

Others authors to benefit from similar huge extra exposure will include Maeve Binchy, Alexander McCall and Lynda La Plante.

“It’s all about getting books which are easy and exciting to read in front of people who wouldn’t normally pick up a book”, said Jacqueline from her home in Chelmsford, Essex, today.

Jacqueline – who prefers to be called ‘Jac’ – has been writing since her teacher training was cut short by ME after a bout of glandular fever in 1993. “I suppose if I hadn’t become ill I would be teaching history instead.”

Jac has written over 30 books, many becoming best-sellers in their own right. In her mind’s eye, she bases her characterizations for the Dr Who books on the latest actors in the TV series with Matt Smith leading the cast in ‘Magic of Angels’. But she refuses to be drawn on who has been her favourite Dr Who.

Jac, who is aged 39 with twin boys who start school in September, has also written spin-offs for the Robin Hood and Merlin series. “I’d jump at doing an actual script for a show but I haven’t been asked yet”, she said.

Speaking on one of her better days during an ME relapse, 39-year-old Jac said: “Last October I went down with a virus, went into hospital and from then on everything has been pretty much downhill. I had to go and use a wheelchair for going outdoors again – something I hoped I would never have to do again.”

The Quick Reads scheme accompanied by lots of publicity will launch in February and lead up to World Book Day the following month. Each book on the list will cost £1.99. ‘Doctor Who: Magic of Angels’ will win Jacqueline Rayner an army of new readers.

Jac tweets as @GirlfromBlupo – named after her favourite character in ‘Bunty’, the girls’ comic anthology published by DC Thomson until 2001.

In ‘Bookseller’ magazine last week, she wrote: “This incredibly strong line-up of some of the UK’s most accomplished authors builds on the heritage of the achievements of Quick Reads to date, and continues to demonstrate the fantastic commitment we have found among authors and publishers to support our cause and encourage adults to fall in love with reading.

“With such quality writers involved, we can ensure that there is a story for everyone to enjoy and that their first reading experience is not their last.”

She added that more than 3.5 million Quick Reads have been distributed since 2006 to supermarkets, bookshops, workplaces and prisons, as well as more than two million Quick Reads being borrowed through libraries. However, Rebuck urged bricks-and-mortar booksellers to back the campaign with shelf space. She said: “We need our books to be easily accessible on high street shelves and in supermarkets.”

“Typically, those who love their first Quick Read go on to become enthusiastic readers, devouring every book in the series, more books by their favourite authors and then other books entirely.”