From the Reno Gazette-Journal, 1 June 2011 (story by Lauran Neergard). 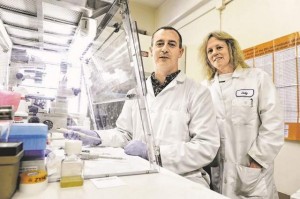 WASHINGTON — Two new studies say a link between a virus and chronic fatigue syndrome probably was a false alarm caused by laboratory mistakes, yet another blow to sufferers of the mysterious illness who hope that finding a cause will lead to a cure.

The journal Science took the unusual step Tuesday of declaring the virus link “seriously in question,” making it the latest potential culprit that could fall by the wayside.

In a headline-making discovery, Reno researchers in 2009 announced they’d found traces of a mouse-related virus in the blood of a number of patients with chronic fatigue, an illness thought to afflict about 1 million Americans. The finding by the Whittemore Peterson Institute for Neuro-Immune Disease fueled hope that a cause might finally have been found even as it led blood banks to turn away donations from chronic fatigue patients — and prompted some patients to try out antiviral medicines normally used for HIV.

Doubt already was growing among many other scientists, as numerous other studies failed to find any connection between the purported infection and human illness.

Now, the newest research, published by Science on Tuesday, said the link with the virus, named XMRV, almost certainly was a result of laboratory contamination and is not a risk to humans.

“I see right now no good reason to believe that this specific virus actually ever infects humans,” said Dr. John Coffin, a Tufts University professor and National Cancer Institute special adviser who co-authored one of the studies.

Those drugs “are not totally harmless. They should be off those drugs,” he said.

Dr. Judy Mikovits, one of the lead researchers at the Whittemore Peterson Institute who discovered the link between XMRV and patients with chronic fatigue syndrome, said no laboratory contamination occurred and the findings are valid.

In a May 30 letter to the editor of Science, Mikovits called the editorial questioning the validity of her and other Whittemore Peterson scientists’ findings “premature” and wrote that it also could have “a disastrous impact on the future of this field of science.”

Annette Whittemore, who founded the institute, said the research that attempts to discredit Mikovits’ discovery does not accurately replicate the institute’s research because, for one thing, antibodies that have not been proven to detect XMRV were used.

She said there will be no retraction of the institute’s findings and its scientists will continue with their work to find an effective treatment for chronic fatigue syndrome and other neuroimmune diseases.

“There are other groups out there that are finding what we are finding, and I know they will be publishing those findings,” Whittemore said. “At the end of the day, we will have a greater understanding of these chronic diseases, and we are not giving up.”

Scientists first uncovered XMRV several years ago, not in chronic fatigue patients but in some men’s prostate tumors.

Here’s why that matters: The National Cancer Institute used sophisticated genetic tracing to show the XMRV virus was created when two other mouse viruses combined during some experiments about a decade ago that involved growing human prostate tumors in the animals. That virus’ genetic fingerprint so closely matches what was later found in samples taken from patients that it’s extremely unlikely the XMRV could have come from another source, Coffin said.

Batches of cells and other lab products are so widely shared that it’s very easy for contamination from mouse viruses and mouse DNA to persist years later and in multiple labs, he said.

In fact, substances in human blood can kill the mouse-related virus, Levy said. He argued that it’s time to move on, saying there’s evidence that chronic fatigue involves an immune disorder: “Let’s use the money to find the real culprit.”

Various viruses have been linked to chronic fatigue over the years, only to be ruled out as potential culprits. Chronic fatigue is characterized by at least six months of severe fatigue, impaired memory and other symptoms, but there’s no test for it — doctors rule out other possible causes — and no specific treatment.