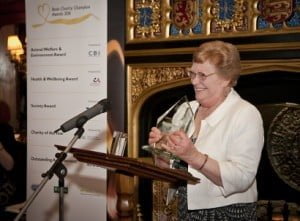 The Countess of Mar, who through her Forward ME Group has provided a forum for all the major ME groups in the UK to speak with one voice, has been honoured for her outstanding achievement in the annual Dods Charity Champion Awards.

The Countess, pictured above after receiving her award in the Speakers Apartments at the House of Commons, was selected for the award by the awards scheme’s steering panel including Lord Archer of Sandwell, Charity Commission chair Dame Suzi Leather and former Labour minister Gisela Stuart MP, who edits parliament’s own ‘The House’ magazine.

In a message to the Forward ME Group, the Countess wrote:

I want to thank you all for the help and support I have received from you over the years. When I accepted it I did so on your behalf. The award is an attractive glass block which will look well on my mantelpiece.

The awards scheme is run on behalf of Dods Parliamentary Companion, which publishes briefing materials about people who work in the Palace of Westminster.

When the Countess founded the Forward ME Group in October 2008, she wrote:

Until the message you want to convey is heard loud and clear by legislators and government your objectives will never be achieved.

I have been in the House of Lords for very nearly 33 years. I have taken an active role in some successful campaigns and have watched the progress of other winners. What comes to my mind immediately is that they have always been supported by a united, informed and determined base of people who want to win.

One of my husband’s favourite sayings is “emotion clouds reason”. I fully appreciate that ME is a physically and mentally sapping illness and that a failure to achieve can lead to emotional stress, dissent and division in the ranks.

Over the years I have been made very aware of disagreements between the various representative organisations that, even when they are minor in fact, they are fairly major in effect. If I know about them then others who make the vital decisions at central and local level do so also. A difference of opinion – professional or lay, is a wonderful excuse for others to do nothing and doing nothing while going through the motions of construction is precisely what has been happening. I think of the CMO’s Report, the NICE Guidelines and all the advice emanating from the DoH and the DWP, for example.