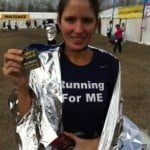 Emily Wren, who is recovering from Chronic Fatigue Syndrome, took part in the Reading Half Marathon on Sunday (March 20) to raise money for the ME Association. Months of concern that her training schedule might be hijacked by her illness vanished as she made it across the finishing line in the mighty Madjeski Stadium. And she’s been back at work this week. Emily has been telling her story in a very frank blog at http://runningforme2011.wordpress.com/– from which this item is taken.

I’ve never been so nervous in my whole life. As the day slowly approached, each morning i’d wake up with the feeling of butterflies in my stomach. And not just because the thought of running that far scared me – but because of the fear of repercussions afterwards with my health.

So by Sunday, I was emotionally drained. Arriving at the start line with 12,000 other people, I began to question whether I really should be doing this. A couple standing next to me asked what ME was, and all I could manage was a mixed up sentence that made me sound like a rather hyperactive 13-year-old.

15 minutes later and it was too late to back out and there I was, crossing the start line, trying my best to blank out the thoughts that I was never going to complete 13 miles (my best so far has been 8).

As we headed off round the outskirts of Reading, I was genuinely surprised and impressed by the amount of people who had made the effort to come out and cheer us all on. The clapping, shouting and cheering really lifted mine, and other runner’s spirits and kept us going.

It got to about 2 miles into the race when a woman gently touched my arm. I turned my head round, initially in shock, after being scared out of my ‘running daze’. She was smiling, and as she ran past she said

“What you are doing is really great, my daughter has ME….”

before she carried on running ahead of me. I could have cried. In fact, the tears began forming and I had to fight them off. Now wasn’t the time to start bawling my eyes out half way through a housing estate in Reading with hundreds of people surrounding me.

But she gave me a push – metaphorically speaking, that carried me for at least another 4 miles, before my body started screaming at me.

Mile 6 was a milestone in more ways than one. It was the half way point, which should help me mentally, and it was also the point where i’d be running through the town surrounded by supporters, and crucially, my parents, who I normally watch the race with every single year, in almost the identical spot.

But I couldn’t run anymore. I’d stuck to my run/walk strategy, but my asthma was kicking in. My lungs were struggling for air, and I had to stop. I slowly walked into the town, attempted to catch my breath and thanks to a helpful bystander was able to – and pushed on into town.

Seeing my parents brought on the raw emotion again. My eyes were welling up, I could see them, looking so proud…I had to carry on, even if it meant walking. I stopped to give my mother a hug, she’s been through it all with me and then some…and she looked me straight in the eye and said “You don’t have to carry on if you can’t go any further, we’re all so proud of you”.

This gave me the energy and push I really needed, and I slowly carried on. Miles 7 & 8 soon arrived to my relief, and I started feeling better again. The hills approaching the outskirts of town were agony, the only thing I could do was slowly walk up them, before gently jogging to the next milestone.

And yet the crowd was relentless. Round every corner, a big group of people, shouting and cheering, I found energy I didn’t even know I had thanks to the act of kindness from complete strangers. Bands were playing, children jumping up and down, it was magical.

The final two miles were brutal – running/walking up a dead straight road leading to the finishing line, which is inside the fabulous Madjeski Stadium (home of mighty Reading (Royals) Football team).

As I walked/jogged the final slope up to the stadium I could hear the crowds, thousands of them sat in the stadium, waiting for their friend/family/colleague to make it back in one piece and cross over the finishing line.

I entered the stadium from the side and the crowd literally carried me to the line. I had no energy to run, yet I managed a sprint, before collapsing on the other side of the finishing line, with a giant grin on my face.

Then the tears started again, everything i’d accomplished, all the people who’ve supported me on the way, it all became a bit too much.

I wiped away the tears and made my way out to collect my medal, quite possibly one of the proudest moments of my life.

When I first started thinking about running the Reading Half Marathon, and blogging about my experiences, I never in a million years thought I’d travel on such an amazing journey.

It all culminated in an exciting and emotionally charged run on the 20th March 2011, which i’m glad to say I completed in the time of 2hrs, 49 minutes.

I can now officially say I ran the Reading Half Marathon (all 21.5km/13 miles of it!)

Thank you to everyone who’s supported me, you will honestly never understand what the support has meant to me and what it has enabled me to achieve. For that, i’m forever grateful.

To all the ME sufferers (and it’s variants) you inspire me. Without you, I wouldn’t have been able to complete my ambitious target. You kept me going through the darker points in all of the runs, making me realise how lucky I am.

And to all the people who have read my blog and tweets and are now more aware of ME, and how it can debilitate people and devastate lives… thank you.

If you would like to donate to my chosen charity – the ME Association, please visit my justgiving page at