With many in the medical profession misunderstanding ME, Dr Nina Muirhead recounts her own experience with the illness and how it reshaped her understanding of it.

Many doctors can find themselves in the position of the patient, and being informed of one’s own diagnosis can be a frightening and emotional experience.

Eighteen months ago, after seeing thirteen different doctors and undergoing multiple tests and investigations, not only was I given a diagnosis of a condition that I didn’t know about or understand, it was an illness I didn’t believe in.

Prior to becoming ill, I had a vague notion that ME/CFS was an illness related to deconditioning. How wrong I was. The NICE guidelines had perpetuated my misunderstanding of ME/CFS by recommending Cognitive Behavioural Therapy (CBT) and Graded Exercise (GET).

From my experience of ME/CFS there was no psychological component whatsoever, besides which exercise, if anything, was making me worse not better. I was not deconditioned or frightened to exercise. The symptoms were more consistent with a brain tumour or multiple sclerosis. The reality is ME/CFS is a serious, heritable, neurological condition and I was shocked to discover subsequently that my grandmother had died from it aged 42.

The BMJ describes ME/CFS as “Often triggered by a viral infection ME/CFS can be distinguished from medical and psychiatric conditions by the presence of debilitating fatigue for more than 6 months; combinations of cognitive dysfunction, total body pain, unrefreshing sleep that does not restore normal function and post exertional malaise”.[1]

I couldn’t work, read or watch TV, I could barely walk and digest my food, I couldn’t even look after my own children. Every time I tried to do anything challenging, whether mentally, physically or emotionally, I would experience severe symptom exacerbation, plus flu-like sore throats and head and neck pain which would render me bedbound for days, weeks or months after the event, which is known as post exertional malaise. Nearly 86% of patients who underwent GET combined with CBT reported a worsening of symptoms.

ME/CFS is not a rare illness, so how could doctors be getting it so wrong? Have we stopped believing in an entire class of patients for whom we don’t yet have the technology to diagnose or drugs to prescribe? I was not surprised to read that 90 per cent of cases of ME/CFS are thought to go undiagnosed, suggesting that people with ME/CFS are substantially undercounted, underdiagnosed and undertreated.

The lack of belief and ignorance surrounding ME/CFS is deep-rooted and causes significant harm to patients worldwide. On the 24 January 2019, ME/CFS was debated for the first time in 20 years in the House of Commons chamber. It was unanimously agreed “That this House calls on the Government to provide increased funding for biomedical research into the diagnosis and treatment of ME, supports the suspension of Graded Exercise Therapy and Cognitive Behavioural Therapy as means of treatment, supports updated training of GPs and medical professionals to ensure they are equipped with clear guidance on diagnosis of ME and appropriate management advice to reflect international consensus on best practice, and is concerned about the current trends of subjecting ME families to unjustified child protection procedures”. [2]

I’ve learned so much about this fascinating condition via the regularly updated ME Association Index of ME/CFS Published Research. New biomedical evidence is emerging; red blood cell deformability is diminished in patients with ME/CFS; there is confirmation of widespread brain metabolite abnormalities in ME/CFS and altered gene transcripts have been detected related to inflammation, circadian clock function, metabolic dysregulation, cellular stress responses and mitochondrial function. 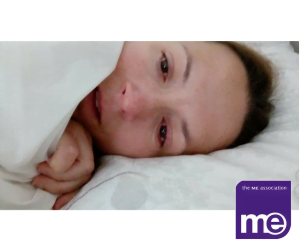 ME sufferers know full well that there is no present cure for this debilitating illness but equally they do not expect or understand why there is substantial denial within the medical profession of the existence of ME/CFS as a physical condition.

We need to be more proactive about making the diagnosis of ME/CFS.

Patient volunteers recently responded to a question written by a medical student on the ME Association website ‘What are the most important things a GP needs to know about ME?’.

Many patients would like doctors to know about the emerging biomedical evidence, but numerous patients took valuable energy to respond with extra comments, the overwhelming message is ME/CFS patients want doctors to really believe them, to believe in ME.