For decades, ME has been the subject of controversy among doctors, patients and the public. Conflicting views on the cause and treatment of this debilitating illness have been rife, with patients caught in the crossfire. Sally Turner, who spent years housebound with ME, uncovers the latest thinking on the illness.

Myalgic encephalomyelitis (ME), also referred to as chronic fatigue syndrome (CFS), is thought to affect around 250,000 people in Britain and 17 million people worldwide – children as well as adults.

One study, published last year, estimated that the annual economic cost of ME/CFS to the nation in relation to lost income, benefits and health costs was at least £3.3 billion, yet the illness has long been plagued by controversy.

ME involves a range of debilitating symptoms that characteristically fluctuate in severity, but is characterised by ‘profound and disabling activity-induced fatigue which almost always affects both physical and mental functioning. The fatigue and other symptoms are not caused by ongoing excessive exertion and are not relieved by rest’ (The ME Association).

Dr Charles Shepherd, medical adviser to the ME Association, explains: “We use ME, even though it doesn’t fully describe the symptoms, because many people have chronic fatigue for different reasons, whereas ME is a specific disease process.”

In 1984, aged 14, I contracted what my GP referred to as a ‘glandular fever-related virus’. My swollen glands and fever disappeared after a couple of weeks, but I was left with painful muscles, clouded cognitive function and crushing fatigue after minimal exertion; walking to the corner shop, sitting in a lesson at school, and even an animated chat on the phone to a friend would leave me barely able to function for hours, sometimes days at a time.

My GP said it was ‘post-viral malaise’ – it took a year, but eventually the symptoms subsided; I was over it, or so I thought.

Then, more than a decade later, aged 28, I was fighting off a nasty flu bug while also trying to manage an acutely stressful situation at work. Suddenly the symptoms returned, and with far greater severity.

Too ill to work, I lost my job, and then my financial independence, active social life and self-esteem. It would take me seven years to recover, and I spent most of that time more or less housebound. Today I’m able to work and exercise, but still have a flare-up of symptoms from time to time, and I get frequent viral infections which it takes a lot longer than average to recover from.

“Emerging research suggests that ME is a complex, multi-system disease that involves abnormalities in muscle, brain and immune system function,” says Shepherd.

“We now think there’s a genetic predisposition to developing it when the right trigger appears. There is a strong degree of consensus that infections are a major factor – vaccinations and pesticide pollution may also be triggers for some people, and undue physical or mental stress at the time of the initial infection may also play a role, but we still have disagreements about what maintains and perpetuates the illness.”

During an infection, the immune system releases chemicals called cytokines which are what makes us feel ‘flu-like’ and under par. Research has shown that in people with ME, cytokine levels are raised, indicating an ongoing overactive immune response.

“Another finding is that some people with ME have an autoimmune component to their illness; they produce auto-antibodies which act against their own tissues,” explains Shepherd. “We also know there are abnormalities in mitochondria [organelles in our cells that produce energy], and other research has demonstrated disturbances to the hypothalamus in the brain, a gland which helps control temperature regulation, appetite and sleep.”

The autonomic nervous system is also involved and issues with the nerve signals that pass to the heart, bladder and bowels may cause problems.

“There’s quite a lot of comorbidity going on,” says Shepherd. “People with ME may report migraine-type headaches, irritable bowel syndrome (IBS), bladder symptoms and problems regulating pulse and blood pressure. All this pathology we now think is linked.”

This has certainly been my experience – along with classic ME symptoms I have also been prone to low blood pressure, IBS, hyper-sensitive bladder, vulvodynia (nerve pain affecting the vulva) and autoimmune issues.

Support The ME Association Christmas Appeal 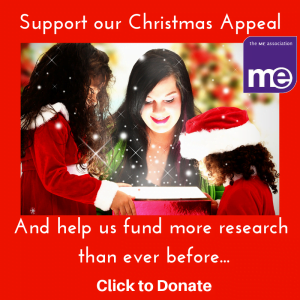 If you have any questions about the Appeal, then please contact our fundraising manager, Helen Hyland. Thank you.