Suicide Prevention Day was on 10th September and awareness is being raised throughout this week.

It’s not something I normally mark. But on 16th September, I’ll be in Bury. Standing near the finishing line of the Asda Foundation 10k run, to welcome my son James back, hopefully safe, sound and smiling.

In memory of my husband

Although I’m really proud of all that James is doing, I dearly wish that he had been able to run for something less close to home.

He hanged himself while I was out. I found him. Thank goodness it was neither of our two sons.

After several attempts I found garden loppers that would do the job. I still remember the thud when he hit the floor.

I’ve since slung the loppers. My memories of that awful day will always be with me – I don’t need objects around to prompt them.

We weren’t better off without him

Alan wasn’t the first person with M.E. to take his own life. Nor will he be the last. I understand why he did it – he simply couldn’t see any other way out.

The pain, misery, inability to function, sleeplessness, frustration, anxiety and destitution all got too much…. And he simply felt that we’d be better off without him.

I’m not saying they are all wrong. But so many articles have been written about the people who commit suicide, rather than the people they left behind. I felt I needed to try to redress the balance.

I do believe that Alan was wrong: we weren’t better off without him.

Alan’s death left such a hole in all our lives – not just his immediate and wider family, but friends, colleagues and community too.

His mother says that when she finally meets him in heaven, the first thing she will do is give him a clip around the ear for all the pain he caused!

So, what did he leave behind?

My son James reminds me strongly of Alan.

It’s not just his looks (the resemblance is so strong that some distant family members have been known to go white when meeting James after knowing his father all those years ago).

It is also his appetite (and annoying ability not to put on an ounce no matter how much he eats), his encyclopedic knowledge of their football team’s progress, his love of sweet foods especially toffee, and his sharp sense of humour.

James particularly regrets that Alan hasn’t been here to share his achievements – the goals at hockey, the school prizes, and concert performances.

There are still times when I feel angry and frustrated that not enough has yet changed for people with M.E. since Alan’s death.

But I am a little more hopeful now. There’s a huge amount of work still to be done, but there seems to be a growing will that more WILL be done.

Too many families are being torn apart by this cruel disease. And too many people are giving serious consideration to suicide as the only means of escape from the horror that they are being forced to endure.

It is time for change! We both feel strongly that if one less family suffers as ours suffered, then our efforts will have been worth it.

That’s why I continue to work for in fundraising for M.E. and why James is running for the ME Association in Bury on 16th September in memory of his father.

Thank you for reading. 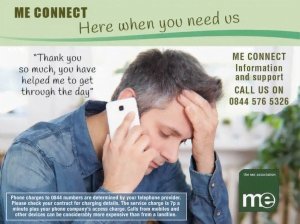 Please donate – whatever you can afford – to help us continue with our work to make the UK a better place for people with M.E. Just click the button below to visit our JustGiving page: