A devastating disease that for years was cruelly dismissed as laziness is to be discussed in a landmark three-hour parliamentary debate on Thursday (21 June).

ME (myalgic encephalomyelitis) affects 250,000 people in the UK and presents as an exhaustion so severe that it leaves people, at best, struggling to work, and at worst, leaving sufferers to endure a tortuous existence, a living death, where they are unable to take their place in society.

People living with ME have been disbelieved, stigmatised and told it’s ‘all in their heads’ – despite one in four being so severely affected that they are housebound, bedbound, and in some cases, unable to shower, clothe, or feed themselves.

Earlier this year, a coroner ruled that 21-year-old Merryn Crofts, from Norden, was the youngest person to die from the illness after a six-year battle with very severe ME.

Now a three-hour Westminster Hall debate on Thursday afternoon (21 June, 1.30 to 4.30 pm), supported by the ME Association and other charities, will discuss treatments and research into the disease, which is estimated to cost the UK economy around £3.5billion in lost taxes, healthcare and benefit costs.

Many doctors still don’t know how to diagnose and manage ME, and lack or research means that there aren’t any effective forms of treatment, despite quality of life studies revealing the level of disability experienced with ME can be just as great as many other serious medical conditions, including cancer and multiple sclerosis.

While some people with ME do improve over the course of time, it is only a small minority that return to full normal health.

Merryn’s heartbreaking story is also understood to form part of the discussion, as one of only two people to have the disease officially recorded by a coroner as a cause of death.

The debate, led by Carol Monaghan MP (SNP, Glasgow NW) and Nicky Morgan (Con), has had cross-party support and will be attended by local MP for Middleton and Heywood, Liz McInnes, who confirmed she intends to speak during the debate.

Rochdale MP, Tony Lloyd confirmed that due to his role as a Shadow Cabinet member, he cannot participate in the debate, but will be watching closely.

He said: “Unfortunately it is a Westminster Hall debate, I cannot participate as a member of the Shadow Cabinet. However, I will of course be watching the debate closely and with interest.”

Ms Monaghan will call for more funding for medical research into the causes and mechanisms of the illness, which affects all ages, races and genders, and speak of the absence of effective treatment programmes.

Merryn’s family said: “We are really excited for the debate itself and think it’ll be an excellent opportunity for ME, as it will help show that the disease can be fatal.

“Carol Monaghan has been personally in touch with Amy [Merryn’s sister] to ask if Merryn’s story can be mentioned and discussed during the debate to help show the reality of very severe ME, and the reality sufferers face in receiving recognition of their condition (and how this can then impact them becoming worse and more severe).”

Ms Monaghan said: “Scant press coverage and a desire for quick catchy headlines has meant that perceptions of ME as ‘yuppie flu’ or laziness are common, but surprisingly little is actually known about this condition.

“Many sufferers report that their ME was first triggered by a viral infection such as flu or glandular fever and have been battling with this debilitating condition ever since. Indeed, ME presents in much the same way as a flu with extreme headaches, muscular pain, poor appetite, sensitivity to light and broken sleep common. With ME however, these symptoms do not abate and can remain for many years.

“Elderly family members are often the main carers and the effect on relationships is significant, but despite this, there is little recognition of the impact of the condition.

“To date, the most significant study into ME is the controversial PACE Trial, which considered ME from a psychological perspective, rather than a pathological one.

“Its findings, that ME could be improved with simple lifestyle changes, a positive mental attitude and some gentle exercise known as ‘graded exercise therapy’, have formed the basis of current treatment.

“However, this trial, now regarded by many scientists as flawed and unreliable, has provoked a backlash from patient groups who report that even mild exercise can worsen symptoms and set back recovery by months or, in some cases, years.

“Since the start of the year, I have been pressing the government for significantly increased funding for biomedical investigation.”

A spokesman for the ME Association, which campaigns to make the UK a better place for people with the illness, added: “Government funding into the causes and treatment of ME is simply pitiful compared to the size of the problem in this country.

“All the while, some people are taking their lives because they cannot bear the torture this illness brings. All we ask for is a fairer share of funding, so we can find a cure for this devastating disease sooner rather than later.

“We are very grateful that this debate will take place – but there remains a long way to go.”

Watch the debate live on TV

You can watch the Westminster Hall debate on Myalgic Encephalomyelitis, live on Parliament TV. It takes place tomorrow (Thursday 21st June) from 1.30pm. The debate is expected to last for three hours: 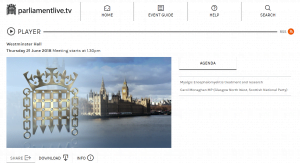