We are pleased to announce that – following the normal rigorous peer review procedures – the MEA Ramsay Research Fund has agreed to fund a study that will be examining what are termed microRNA profiles in peripheral blood mononuclear cells (PBMCs) and exosome-enriched vesicles.

The study will involve the use of ME Biobank blood samples that have been obtained from people with severe ME/CFS and from our Biobank group of healthy controls.

The research will be carried out by Professor Elisa Oltra and colleagues in Spain and we are hoping that there will also be additional UK collaboration to the involvement of the ME Biobank in supplying the samples.

The study will start early in the New Year and will take 12 months to complete. 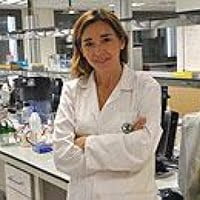 
DR CHARLES SHEPHERD, MEDICAL ADVISER TO THE ME ASSOCIATION, COMMENTS

Elisa Oltra, who is Professor of Cell and Molecuar Biology, and her colleagues at the Catholic University of Valencia in Spain have a well established biomedical research facility for this type of work and the group has developed an international reputation in this complex area of scientific investigation at a cellular level

Professor Oltra gave a presentation on this work at the 2016 Invest in ME conference – see conference report here:

A microRNA (abbreviated to miRNA) is a small regulatory protein molecule that is found in plants, animals and some viruses. It has regulatory functions including the regulation of gene expression – how genes express their functions.

The discovery and study of miRNAs has opened up the possibility of developing new ways of helping to objectively diagnose a long list of diseases, including ME/CFS, autoimmune and neurological illnesses. This research will aim to build up a detailed picture of possibly diagnostic changes in miRNA profiles in ME/CFS – as has been found in fibromyalgia. 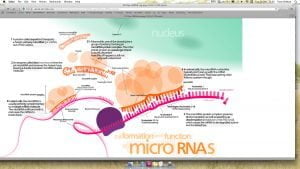 Here’s a diagram of MicroRNA and a brief explanation. 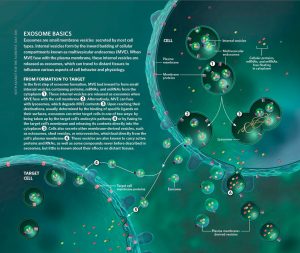 Peripheral blood mononuclear cells (PBMCs) are defined as any blood cell with a round nucleus (i.e. a lymphocyte, a monocyte, or a macrophage). These blood cells are a critical component of the immune system and are involved in fighting infection and adapting to intruders. The lymphocyte population consists of T cells, B cells and Natural Killer cells.

The aim is try and find miRNA profiles that could serve as both diagnostic and sub-grouping biomarkers, as well as biomarkers of disease severity and biomarkers that could be used to objectively measure the effect of treatment.

The findings from this research could also reveal alterations in key cellular pathways that may then lead to new approaches to the drug treatment of ME/CFS.

RELEVANT PUBLICATION FROM PROFESSOR OLTRA RELATING TO THIS RESEARCH

Identification of a microRNA signature for the diagnosis of fibromyalgia.

Diagnosis of fibromyalgia (FM), a chronic musculoskeletal pain syndrome characterized by generalized body pain, hyperalgesia and other functional and emotional comorbidities, is a challenging process hindered by symptom heterogeneity and clinical overlap with other disorders. No objective diagnostic method exists at present. The aim of this study was to identify changes in miRNA expression profiles (miRNome) of these patients for the development of a quantitative diagnostic method of FM. In addition, knowledge of FM patient miRNomes should lead to a deeper understanding of the etiology and/or symptom severity of this complex disease.

Microarray analysis of FM patient PBMCs evidenced a marked downregulation of hsa-miR223-3p, hsa-miR451a, hsa-miR338-3p, hsa-miR143-3p, hsa-miR145-5p and hsa-miR-21-5p (4-fold or more). All but the mildest inhibited miRNA, hsa-miR-21-5p, were validated by RT-qPCR. Globally, 20% of the miRNAs analyzed (233/1212) showed downregulation of at least 2-fold in patients. This might indicate a general de-regulation of the miRNA synthetic pathway in FM. No significant correlations between miRNA inhibition and FM cardinal symptoms could be identified. However, the patient with the lowest score for mental fatigue coincided with the mildest inhibition in four of the five miRNAs associated with the FM-group.

We propose a signature of five strikingly downregulated miRNAs (hsa-miR223-3p, hsa-miR451a, hsa-miR338-3p, hsa-miR143-3p and hsa-miR145-5p) to be used as biomarkers of FM. Validation in larger study groups is required before the results can be transferred to the clinic.