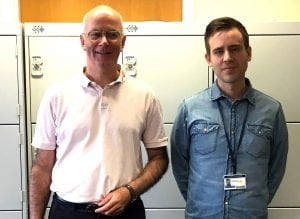 Our Christmas appeal to fund ground-breaking £50,000 research into M.E. means a lot to Jamie Strong.

The administrative assistant (pictured with lead investigator Dr Karl Morten) will be working alongside scientists from Oxford and Newcastle universities as part of the team on the planned 12-month project.

But he also knows what it feels like to live with the daily struggle of the illness: both he and his sister, Lara, 25, have been diagnosed with it.

“It’s incredible to be involved with this research,” says Jamie. “Having ME makes me even more passionate about finding answers.”

“And I’m really enjoying it. To be able to see experiments in the lab, the innovative biomedical research that is happening, it gives me inspiration and hope.”

The 27-year-old, whose illness forces him to use a wheelchair, is working for five hours a week for Dr Karl Morten, who is leading the research.

“I can’t imagine this would happen in something like cancer or transplant research,” says Dr Morten. “But it’s very helpful. Jamie is a real talent; smart, articulate, with a real drive to be involved. It has been an eye-opener for me as to how his ME holds him back.

“Many people see him around when he’s working here, or see him in his wheelchair, but have no idea that he has ME. It’s not talked about, people don’t ask. It’s only when you do start talking, you begin to realise how many people have ME – or know someone who has it.”

Jamie – son of ME Association trustee Nicki Strong –  fell ill with a tummy bug on a family holiday to Egypt in 2005. An active teenager who went running several times a week, he never fully recovered, and was forced to drop out of university. Lara, now 25, developed symptoms a few years after her brother, following the onset of glandular fever.

“In 2009 I got a casual job in a care home,” explains Jamie, “but had to go down to part-time after six weeks and then give up after another six weeks. Pushing through made my illness more severe to the point where I became mostly bedbound, in constant pain and felt like my body was on the edge of dying for about three and half years.

The recently-bought electric wheelchair has meant that he can conserve more of his physical energy, which enables him to get to work and live independently.

“I’m doing a lot of background reading as part of my involvement with the research, which is hard because my concentration and memory are severely affected so I have to go over information repeatedly. But I’m grateful to be involved.”

Our Make ME Better appeal aims to raise £50,000 to fund the research which will see scientists searching for chemical clues that are left behind after changes in cells – it’s the new science of metabolomics.

Finding similarities in the cells of patients diagnosed with ME could help identify a simple new blood test for the condition, generate interest from pharmaceutical companies – and ultimately lead to a cure.

Helen Hyland, fundraising manager for the ME Association, said: “Jamie’s story is a reminder of how ME steals lives. Raising £50,000 for our Christmas appeal is ambitious – but if it helps us find out more, then every penny will be worth it.”

To donate to Make ME Better, please visit our JustGiving page
www.justgiving.com/campaigns/charity/meassociation/makemebetter