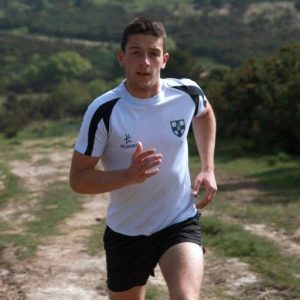 Super fit teenager Tom Hunt is hoping to race into the Guinness Book of Records by becoming the youngest person to run from Land’s End to John O’Groats – as a thank you to an inspirational teacher.

The 18-year-old, who has just completed A-levels at Canterbury’s King’s School, will cover around 900 miles in 31 days – the same as 38 back-to-back marathons – braving hills, rain, and blistered feet. And he starts running at 6am tomorrow (Thursday) – hoping to reach Redruth a few hours later.

It’s all for a good cause as Tom, from Crowborough, East Sussex, already has pledges of £8,500 for a charity close to the heart of the school’s head of Cadet Corp, Major Adam Vintner.

Major Vintner’s father, Fred, a former athletics teacher, has suffered from Myalgic Encephalomyelitis (ME), which causes exhaustion that does not go away with rest or sleep, since 1986.

“Major Vintner has helped me a lot, especially because I want to join the army after university. I’d wanted to do this challenge for a while and I decided to run it to raise money for the ME Association, which supports people with ME, as a thank you to him.”

Already an extreme sport veteran after climbing Mount Kilimanjaro at 16, he has completed the coast to coast – 105 miles of cycling, running and kayaking – twice and has been in training for his latest challenge – affectionately known as LE JOG – since last year, regularly covering 60 miles in a day.

He only started running, after a shoulder injury forced him to stop playing rugby.

“At the moment there isn’t a specific record for the youngest person to run from Land’s End to John O’Groats. The youngest person I managed to find was 22. I’ve spoken to the Guinness Book of Records, and I will have to supply them with evidence – but I’ve got a hand-help GPS which will record my runs.”

Tom starts from Land’s End tomorrow (Wednesday). His sister Susie, 19, will be his support crew, and will also be making a film about the run. To keep costs down, the pair appealed on social media for places to stay and have been overwhelmed by the response along the route.

“My family have been very supportive and helpful. They keep telling me I’m slightly mad, but they know how much I enjoy this sort of thing and how hard I’ve been trained for it.

“I hadn’t heard of ME before, but because I wanted to understand what I was running for, so I’ve researched it. It’s a really cruel illness, and misunderstood. I haven’t met Fred in person yet, but we have emailed and I’d definitely like to meet in the future.”

While his family and friends might worry, cool customer Tom is taking it in his stride, and one jelly baby at a time, after being urged by other ultra running veterans to keep his energy up with a gelatine sweet at every mile mark.

“I know it’s a big challenge, and I’ve trained hard, but I try not to think about it too much. I live in the moment and when I’m running, take everything one step at a time. I’m more interested in what I’m having for lunch!” he says.

Helen Hyland, Fundraising Manager for the ME Association, said: “At 18, Tom is completing the sort of Herculean challenge that for most of us would be unthinkable.

“Although he’ll be exhausted at the end of each day, he is young enough and fit enough to bounce back after a few good night’s sleep – something someone with ME can only dream of.

“All our fundraisers are heroes, but he’s truly breaking the pain barrier for us. We really can’t thank him enough…although maybe a bag of jelly babies would be a good place to start!”

To sponsor Tom or find out more visit his fundraising page www.justgiving.com/fundraising/Tom-Hunt-Run