From The Blog at the Huffington Post, 20 April 2016 | By Dr Simon Duffy, Director of the Centre for Welfare Reform.

In the wake of the resignation of Iain Duncan Smith, the UK Government’s attack on disability benefits has only just started to receive mainstream coverage. Until recently the Government managed to get away with presenting cuts in disability benefits as if they were ‘reforms’ that would improve people’s lives, by increasing employment or reducing illness. For instance, despite the overwhelming evidence that cuts targeted disabled people, a civil servant working for Iain Duncan Smith’s DWP claimed that:

“…the Government expects its reforms to taxes, welfare, and public service spending to have a long term positive impact, in particular helping to get more people into work by making work pay and providing greater support for those who cannot work by targeting resources more effectively.”

Government strategy often relies on a combination of prejudice and wishful thinking. For instance, it implies those not working are possible ‘skivers’ – people who could work, but who choose not to. At the same time the Government cites research supporting the so-called ‘biopsychosocial’ model of disability – a model that assumes disability is partially caused by the attitudes of the sick or disabled person. Although the biopsychosocial model is expressed in highly technical terms it is easily twisted to support ugly prejudices.

Moroever the evidence used to support the biopsychosocial model is often weak, or misleadingly presented. For example, in 2006 the DWP funded a group of academics to run the PACE trial, which the Wolfson Institute of Preventative Medicine describes as follows:

“This large-scale trial is the first in the world to test and compare the effectiveness of four of the main treatments currently available for people suffering from chronic fatigue syndrome (CFS), also known as myalgic encephalomyelitis (ME).”

Results from this trial were published in 2011 and presented as an exciting success for biopsychosocial interventions, like Cognitive Behaviour Therapy (CBT), in the battle to reduce the impact of ME. Since then the Government has gone on to use the biopsychosocial model in support of its general approach to benefit cuts and welfare reform. For instance, in 2012 Lord Freud defended the ‘reform’ of Disability Living Allowance in the House of Lords:

“…we have gone for the biopsychosocial model. That model has now garnered very significant academic support, as those noble Lords to whom I sent that very interesting piece of research will recognise.”

Unfortunately it turns out that this research is often deeply flawed. For instance, the Centre for Welfare Reform has just published a report by George Faulkner which suggests that, on the basis of its published results, many of its claims cannot be validated. Picking just one example from the many problems in this research – it turns out that because the standard for ‘recovery’ was lowered after the research began you could even get worse and still be counted as having ‘recovered’ (see figure). Another analysis of this research in the Journal of Neurology and Neurobiology proposes that the therapies recommended by the PACE trial are so harmful that, if they were medicines, they would be withdrawn from the market. 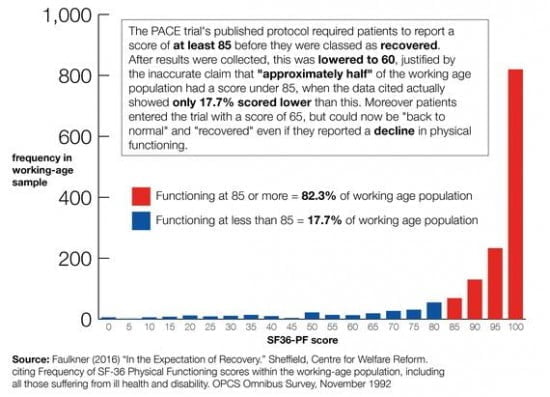 It is not the biopsychosocial model on its own that causes these distortions, rather it is our underlying prejudices and fears that feed a plethora of bad policy and practice. For example, recent research shows that the needs of people with ME are not being respected in assessments for social care. At the same time the DWP is deploying an array of psycho-coercive methods to reinforce its message that unemployment is the fault of the unemployed.

Scapegoating – blaming the innocent victim – has always helped the guilty avoid their sense of responsibility for sins or errors. The strategy makes perfect sense at a time when politicians are bailing out banks, subsidising mortgage holders, while trying to blame our problems on group who are too weak to fight back. Hence we scapegoat disabled people, people in poverty, immigrants and asylum seekers.

However, while it may not be surprising that some politicians embrace dubious research, which encourages them to be cruel to be kind, there are other important questions to ask. For instance, why have the researchers involved not shared the full data from this publicly funded research? Also, why are so many researchers closely connected to private insurance companies, who are lobbying Government to replace our social security system with private health insurance? When politicians are looking to blame social problems on minority groups, as they have with disabled people, one might hope that scientists would avoid the temptation to pander to this need.

This whole phenomenon reveals the paradox at the heart of modern day neoliberalism. The rich and powerful declare that the highest ethical value is freedom – the freedom to take personal responsibility for their own actions, and the freedom to avoid any responsibility for other people. But they do not actually trust the rest of us to use our freedom responsibly. So they must nudge, bribe or bully us into what they deem desirable behaviour. Whatever happened to the idea that we are equal citizens, who must take care of each other and that the job of the politicians is to work for us?