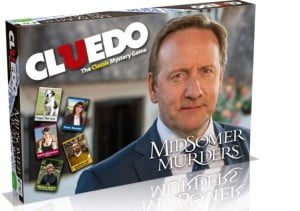 A new Cluedo board game based on the ITV series, set in Midsomer county, has a new fictional character – and the woman playing her is from Norfolk.

Hannah Radenkova, 29, was chosen as new character Nikita Fenchurch, a local psychic, by a panel of judges, after she sent a photograph of herself looking the part to a competition on the Midsomer Murders Facebook Page.

The new game follows the same format as the TV programme, with the deadly deeds taking place in the county of Midsomer and features key cast members from the show.

It is the first time members of the public have featured in Cluedo.

Two other new fictional characters were also chosen – the village vicar and the pub landlord.

Miss Radenkova, who lives with her parents in Punsfer Way, Tilney St Lawrence, near King’s Lynn, said it would be strange knowing that her face was on one of the playing cards.

She said: “I have always watched Midsomer Murders, and always loved crime dramas.

“I used to watch them with my nan when I was little. I was following it online, and my friend showed me the competition, which I thought was really fun, so I gave it a go.

“All I had to do was decide which of the three characters I wanted to be.

“I did not look like the other two, so I went for the psychic.

“I dressed up for the picture at home. It all feels a bit surreal, but it will be a good dinner party story.

“I did play the original Cluedo and I have told my friends that I will be available for a Cluedo box signing.”

Miss Radenkova used to be an illustrator for children’s textbook manuals but has suffered from ME for more than three years, and needs to take constant rests.

She currently blogs about her condition at superpooped.blogspot.com

Born in London, she grew up in west Norfolk and went to school in Marshland St James. After university she worked for an agency in London, before returning to Norfolk.

Midsomer Murders Cluedo is available to buy from February 5 exclusively from Amazon.