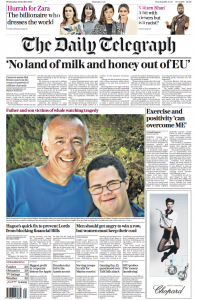 1. The ME Association complained to the Independent Press Standards Organisation that The Daily Telegraph breached Clause 1 (Accuracy) of the Editors’ Code of Practice in an article headlined “Exercise and positivity ‘can overcome ME’” in print, and headlined “Chronic Fatigue Syndrome sufferers ‘can overcome symptoms of ME with positive thinking and exercise’” online, published on 28 October by The Daily Telegraph.

2. The article reported that an Oxford University study had found that Chronic Fatigue Syndrome (CFS) is not a “chronic illness”, and that the symptoms of the condition can be overcome by “increasing exercise” and “thinking positively”, in reference to Cognitive Behavioural Therapy (CBT) and Graded Exercise Therapy (GET) respectively.

3. The complainant said that the study did not find that CFS is not a “chronic illness”. Further, the references to “thinking positively” and “increasing exercise” misleadingly suggested that the condition can be overcome by simple lifestyle changes.

4. The newspaper said that the article had been written for a non-specialist readership, and that readers would understand “chronic” conditions to be ones with symptoms that are difficult to alleviate. The article made clear that neither the cause nor the cure for CFS was known. In this context, and given that the study found that some CFS symptoms could be alleviated in some patients, it was not significantly misleading to summarise that the study found that CFS is not a “chronic” condition. The article also set out briefly what CBT and GET involves, and describing these as “thinking positively” and “increasing exercise” was therefore not significantly misleading.

i) The Press must take care not to publish inaccurate, misleading or distorted information, including pictures.

ii) A significant inaccuracy, misleading statement or distortion once recognised must be corrected, promptly and with due prominence, and – where appropriate – an apology published. In cases involving the Regulator, prominence should be agreed with the Regulator in advance.

iii) The Press, whilst free to be partisan, must distinguish clearly between comment, conjecture and fact.

6. The complaint was not resolved through direct correspondence between the parties. IPSO therefore began an investigation into the matter.

7. After further correspondence, the newspaper offered to publish a clarification in print and online, and agreed the following wording with the complainant:

An article of 28 Oct reporting on a University of Oxford study (“Exercise and positivity ‘can overcome ME’”) stated that Chronic Fatigue Syndrome (ME) is not actually a chronic illness. In fact, the study reported that Graded Exercise Therapy (GET) and Cognitive Behavioural Therapy (CBT) can alleviate symptoms of the condition but did not say that it was not chronic. We are happy to make this clear. The ME Association opposes GET on the basis that it can exacerbate symptoms, and says that the use of CBT as a primary treatment strategy is based on the flawed belief that ME/CFS is a psychological problem.

8. The complainant said that this would be a satisfactory resolution to his complaint. As the complaint was successfully mediated, the Complaints Committee did not make a determination as to whether there had been any breach of the Code.

Our earlier story can be found HERE.