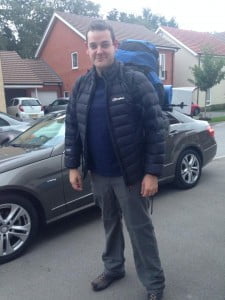 Ewan Ross wasn’t going to let a little thing like a volcano erupting disrupt his plans to climb another high peak in South America to raise money for the ME Association.

The 35-year-old from Bracknell in Berkshire had planned to climb Cotopaxi – Ecuador’s second highest volcano – but had to abandon that idea after it began to erupt. Now he’s chuffed that he has pulled off a spectacular 11-day expedition to the summit of Cayambe, which at 5,790m is five times taller than Ben Nevis.

“It was literally the toughest thing I’ve ever done physically and mentally”, Ewan emailed after completing the challenge a couple of days ago.

“The final summit was an eight-hour climb which began at midnight and the only light being that given off my our head torches.

“There were crevasses, high winds, ice rain and the altitude to contend with – on top of the relentless climb up 45 degrees ice and snow to the top. The feeling at the top was nearly as amazing as the views and I am glad and proud that I got to the top and raised a few quid for the ME Association.”

He’s pictured (above) leaving home for the airport on September 11.

If you would like to support Ewan’s fundraising, please visit his online page at /www.justgiving.com/ewanrosscotopaxi/