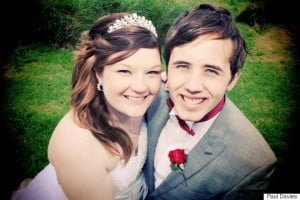 Caring for a partner is something you don’t envisage doing until later life, but for Paul Davies it’s a lifestyle he has had to learn to cope with at just 24.

Paul is a full-time carer for his wife Kate, who suffers from Myalgic Encephalopathy (ME), or more commonly known as chronic fatigue syndrome, and fibromyalgia – a long-term condition which causes pain all over the body.

He has been Kate’s carer for almost five years, and cares for her on his own, although says family steps in for a few hours “here and there” when they can.
HTML5 video is not supported!

“Kate and I had just moved in together when she started to get really ill,” Paul explains. “In the space of a couple of weeks she went from being a relatively normal 19-year-old girl to being unable to get out of bed.

“Over time I just started to take on more and more responsibility for her life. At first, I started doing all of the housework. Then I began to help her get dressed, washed and getting up and down from chairs and bed.”

Rather than making a conscious decision to become Kate’s full-time carer, Paul says “it just crept up on me”.

“I can’t say that I decided to become a carer, it just happened. It was a long time before I realised that I was caring for my wife.

“Sometimes you become so immersed in the situation that it isn’t until you take a step back that you realise how much things have changed.

He adds: “That being said, I suppose that when we realised that I was caring for her, I decided that I was ok with that.”

“My wife always gave me the option to walk away. Even a few days before our wedding day, she told me that I could leave and that she wouldn’t stop me.

“I decided each and every time that she was worth caring for. I have never once regretted that decision.”

Being a carer is an all-consuming job, and Paul’s day-to-day routine varies according to Kate’s illness.

“It’s so unpredictable that it’s difficult to settle into a routine,” he explains. “I’m going to describe a day when my wife’s health is good because when it’s not, she doesn’t leave her bed.”

Some days, Paul says, his wife is in so much pain she is unable to move and is confined to her bed all day. Other times, she is so exhausted she sleeps for 22 hours straight.

“When this happens I tend to just keep her company and keep her spirits up,” the devoted husband says simply.

Paul wakes at each morning at 6am to give Kate her medication. “Sometimes,” he adds, “if her muscles are particularly painful, I will also massage heat lotion in her arms and legs and fetch her a hot water bottle.”

The Cardiff-based graduate wakes again at eight to start his day. “I make breakfast, bring it to her bed and then we’ll spend some time together before I start on my household chores.

“After that I will either help my wife get washed and dress or get on with some writing work or running my small business. We try to get her washed and dressed everyday but it’s not always possible. She find it painful and exhausting.”

At 12pm, Paul will administer more of Kate’s medications, and bring her her lunch.

“Sometimes we have appointments in the afternoon, with doctors, social workers. If we don’t then we try to get out for coffee or at least just get her out of bed. We both love to write so if she’s well enough we’ll go out and write together.

“We try to see friends as often as we can, but that’s not always possible. It can be so exhausting for her just to hold a normal conversation.”

At 6pm, Paul has to give Kate another round of medication, will cook dinner and try to finish off any house work which needs doing.

“We then try to spend some time together,” he explains, saying the couple will usually watch films or read together.

Paul often has to work late in the night in order to manage his business and writing career, but says he and his wife are adamant their relationship doesn’t just become a carer-dependent one.

“We invest in our marriage to keep it strong and maintain our intimacy.”

The pair will go to bed at 11pm, after Kate has had her final dose of medication.

“Again, I often have to massage her muscles with heat lotion,” Paul says. “Sometimes she can’t sleep because she’s in too much pain.

“Those nights I struggle to sleep too.”

Caring is a huge challenge, but Paul says the greatest is leaning how to balance your life.

“It’s an immersive job. It can be so demanding that it completely takes over. It can be a real challenge to pursue other ambitions or even maintain friendships.”

Paul cared for Kate even while he was studying at university, which he said pushed him to his limits and meant working “all the time” just to keep up.

“There were so many times where I thought that it was just too much to keep going but ultimately studying was what I really wanted to do.

“I persisted. It was tough, unhealthy and by the time I graduated I had made myself so ill. But I came out the other side.”

For Kate, it was hard watching her husband “being eroded”.

“I started to notice that he was under so much pressure that he was losing parts of himself,” she says. “He’d always been playful and young at heart but for a time these things disappeared.

“He lost his sense of humour and the joy he found in life. But together we fought hard to reclaim these things. In the end he came back stronger, we both did.”

Paul will readily admit he made “a lot” of mistakes, but eventually learnt how to manage his life.

“There’s always something to be done and sometimes letting go of some of these things is the only way that you can ever move forward.

“I learnt so much about myself, about what matters most to me. When you have to actively strip your life back you really grasp what your priorities are.

“I am truly blessed that I have my wife in my corner to encourage me and remind me that I matter too.”

Visit the Carers Trust website for more advice and help for carers.