After a mystery illness forced her to give up the sports and theatre training she had practised since childhood, Aoife Malone was left feeling like no one understood her. She recognised her symptoms in a chance article – she had all the markers of someone with ME. Now 21, she wants to raise awareness of the disease.

AOIFE – IN HER OWN WORDS 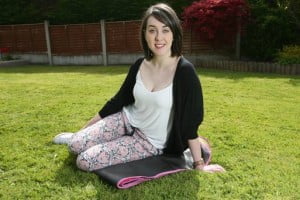 Sleeping more, losing touch with friends and disengaging from previously enjoyed activities; these are characteristics often associated with becoming a teenager. However, this for me was not a choice. Bed-bound, unable to attend school and incapable of staying awake for longer than an hour or two – at 14 I was suffering from a so-called ‘invisible disease’, namely ME.

Myalgic encephalomyelitis (ME), sometimes referred to as chronic fatigue syndrome, is a multisystemic, debilitating disease, which affects people from all walks of life: both male and female, young and old.

It can be a lifelong disease, causing similar levels of disability as lupus, multiple sclerosis or congestive heart failure, yet fails to procure any recognition from the Irish medical community who seem unwilling to acknowledge it as a physical illness in its own right.

More than one million Americans suffer from ME, which is more than multiple sclerosis, muscular dystrophy and motor neurone disease, combined.

Approximately 12,000 people in Ireland are suffering in silence with this condition, with more than 70pc going untreated, as not only are there no formal diagnoses, Irish ME sufferers face an ever-ending battle to access the support, help and understanding that is accorded to others who have more widely recognised illnesses.

Up to the age of 14 I was extremely active and enjoying the newfound lease of life that came with becoming a teenager and settling into secondary school. I played GAA for my local club and school and also enjoyed athletics.

But most of my time was spent preparing musical theatre pieces; singing, dancing and acting had become my life; with Saturdays taken up with theatre training. Little did I know that within a few months, I would have no choice but to give it all up.

Every child picks up infections, but I always seemed to be only getting rid of one, when I would pick up another. I became exhausted. Not the kind of tiredness you get after a long day of working, but how you would expect to feel after running a marathon with a baby elephant on your back, all while having the flu!

Not long after, I began having constant aches and pains in my joints that made me move like a 90-year-old, suffering headaches and perhaps the worst of all, the incessant brain fog.

This obscuring mist clouding my brain had a significant impact on my cognitive abilities and was probably one of the most demoralising aspects of my illness.

I couldn’t focus long enough to do my schoolwork anymore and soon even having a conversation became a chore – I never before appreciated the ability to automatically string words together in a coherent sentence, or to walk unaided for longer than a few steps.

For someone who loved to learn and had a good circle of friends, it was devastating not to be able to keep up with my peers socially and academically.

Unbeknownst to me at the time, these symptoms were common in ME, along with sore throats, dizziness, disturbed and unrefreshing sleep and a worsening of symptoms after even mild activity.

Recent research has indicated that ME may alter processes in both the immune and nervous system, but because of the wide range of physical and psychological symptoms, which often fluctuate over time, it can be very hard to diagnose.

Eventually my mum came across an article about this controversial illness – ME, and suddenly as if by magic, all the pieces fitted together.

It felt like I was reading my life story looking through the symptoms, but on seeing the treatments available – or rather lack of – my heart became heavy once more.

Then began the incredibly long and difficult process of trying to find a doctor who could both diagnose and treat me for this condition, but in hindsight, it probably would have been easier to find a double-ended needle in a pile of needles.

As the months went on, we attended any consultant who would see me but nobody seemed to have any answer as to what was causing this illness. Routine blood tests showed no abnormalities and time and time again I heard how I was imagining it; how it was all in my head or how I was making it up for attention in order to stay home from school.

Despite being recognised as a neurological illness by the World Health Organisation, most doctors still don’t recognise ME.

Instead they send you on your way with a prescription for anti-depressants and a treatment plan of Graded-Exercise-Therapy; which in my opinion only worsens the condition.

Eventually you begin to feel worthless, like you can’t do anything right – you can’t even be sick right! Most people breathe a sigh of relief when a doctor tells them they can’t find anything wrong; I would cry. Sometimes I could make it home before breaking down, but most times I barely made it out of the office.

One moment I will never forget the reaction I received in one hospital, after being advised to attend Accident & Emergency if my symptoms reoccurred, and after waiting all day in the waiting room, I was met with the words: “But what do you expect us to do for you?”.

The tone of condescension and impatience underpinning these words were heartbreaking, as my parents and I sat in silence in disbelief of this apathetic statement.

Nearly seven years on and I’m still trying to learn how to manage my condition. I’m incredibly lucky that even though my ME has relapsed several times after periods of physical or mental stress, it tends to run in a cyclical pattern and there are times in which I can lead a less-restricted lifestyle.

I’m so lucky to have had my family’s unwavering support to help me get some answers and help me manage this illness, but there is no doubt it has had a significant impact on all our lives over the past few years, as it requires a complete lifestyle overhaul and limit on activities.

However, each person with ME is different and some people do not get a reprieve from these debilitating symptoms. A lot are so ill they are unable to move and may need tube-feeding in order to survive. Even those with milder forms of ME cannot live a normal daily life and work is usually impossible.

For a long time, I couldn’t accept that this ominous condition was a part of my life. I didn’t want to accept it. I didn’t have the answers to give people when they questioned my illness, because I couldn’t understand it myself. Soon, you would become pretty accustomed to the fake voice people used, clearly indicating their disbelief, and the look which accompanied it. It was hard feeling excluded from society. I feared having to explain why I was ill and what was wrong so I began to hibernate away from it all – life was hard enough as it was.

I am now nearly 21, and I am slowly starting to come to terms with my ME.

I am not lazy – I am sick. But then why, when people ask why I’m ill or why I’ve missed so much college, why do I feel myself going red, stuttering and fumbling some excuse about having an infection?

This angers me more than anything. Why should I be embarrassed? I have nothing to be ashamed of. In fact, I should be proud, as despite all the adversities I’ve faced over the last decade I still managed to complete my Leaving Certificate with the rest of my class and I am now studying Psychology in Maynooth University.

A comment made by Una Mullally with regard to the upcoming marriage referendum struck a chord with me, and suddenly everything made sense: “It’s hard to accept yourself, when your country doesn’t”.

I cannot speak for anyone else, nor do I wish to be able to. I simply want to raise awareness for this condition; to help people understand and make them aware of the limits it can place on someone’s life so they may not be as quick to judge next time they come across someone like me.

For more information on ME, visit irishmecfs.org