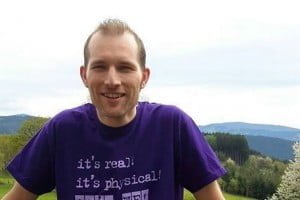 A Southport man whose wife suffers from ME is set to run 23km a week for 23 weeks to raise money to help fight the illness.

Nigel Henshaw’s wife Michelle has suffered from M.E (Myalgic Encephalopathy) for 23 years. So the town centre accountant, with a head for numbers, decided to run 23km every week for 23 weeks.

Nigel’s fundraising started on Tuesday, (May 12,) and he plans to complete the Southport half marathon, Bristol half marathon, and the Lyon half marathon over the summer. Nigel will hang up his worn out trainers on October 23, the day of his 20th wedding anniversary.

He said: “For me personally, it has been hard to watch my wife, Michelle, struggle every day with M.E. Having M.E. makes even the smallest task seem like an impossible feat, even just taking a shower is enough to deplete her energy for the day, and she feels permanently ill.

“If she is able to get out she has to use a wheelchair as standing or walking even for a few minutes is so difficult, and every aspect of life has to be carefully planned to try to minimise the impact of even the smallest exertion as the “payback” of post exertion malaise can take weeks or more to recover from. Spending time with friends and family is often too much for her. Also the psychological aspect of not being able to work, or leave the house for weeks on end and the feeling of watching life pass you by is also difficult to cope with.”

Nigel’s endeavour has attracted support from Liverpool FC, Jamie Carragher’s 23 Foundation and Everton FC. He is now offering a free prize draw, with prizes including an Anfield stadium tour for a family of four, a signed Jamie Carragher shirt and a signed Ross Barkley shirt.

He added: “ME or Chronic Fatigue Syndrome, is an illness that blights the lives of 250,000 people in the UK today. People may be housebound or confined to bed for many months or years. There is no known cure. We have chosen to raise funds for the ME Association because they both fund research and offer much needed support. However, it is as important to me to raise awareness of this devastating illness and the impact it has on people’s lives, as it is to raise funds.”

“If anyone would like to be entered for one of these prizes they can either donate via www.justgiving.com/23forME and state which prize they would like to be entered for in the message (making sure you tick the box allowing Nigel to contact you). Please note that a donation is not necessary to participate, if you wish to enter the draw without donating please send me a message via my facebook page
>www.facebook.com/23formechallenge”