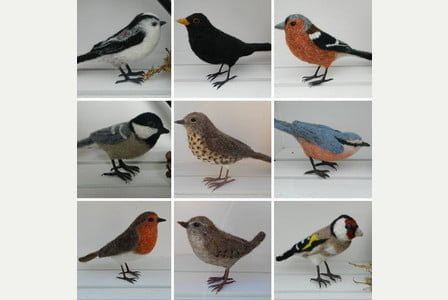 Everywhere you look in Aimee Ball’s pretty cottage, you’ll see birds. Birds on the calendar, birds on the cushion covers, birds in the pictures on the wall… But one little group of feathered beauties – tiny, dainty, and ready to flit away – will make you do a double-take: does she actually have real birds hopping around in the house too?

No. Incredibly lifelike though they are, these tiny chaps have been needle-felted by Aimee – a hobby the 25-year-old took up after developing myalgic encephalomyelitis, better known as simply ME.

The illness, which causes extreme physical and mental exhaustion, means that Aimee can’t work. She has to sleep regularly, and overdoing even the simplest of tasks can have a severe knock-on effect on her health.

“On a bad day, I’m just so tired I can’t do anything,” says Aimee. “My head’s fuzzy, my muscles ache, and I can’t think straight. It’s so frustrating. Sometimes I think I must have done something wrong in a past life,” she adds, with a wry laugh.

Aimee’s problems began five years ago, during her second year at Aberystwyth University. “I was just tired all the time, and I was sleeping a lot – more than a normal student!” she says. “Before I was quite a geek, and would work really hard, but now I was just sleeping all afternoon.”

At first she just put it down to the pressures of studying, “but I started to get a bit concerned when it was going on for months. It was more than normal tiredness. A lot of people say ME is like when you’ve got the ‘flu – apart from the snotty nose and the sneezing. You’re so lethargic, and you don’t feel like you can do anything. That’s what it was like.”

Eventually she went to her doctor, “and they found I had an underactive thyroid, and thought that must be what it was,” she recalls. “I had tablets, and it got better: according to the blood tests, I was fine. But the fatigue was getting worse and worse.”

Test after test followed, until doctors eventually diagnosed ME. It wasn’t a great surprise to Aimee, who soldiered on and completed her degree before taking a 15-hours-a-week job at Waterstone’s.

“I absolutely loved working there, but I was getting more and more tired,” she recalls. “It was getting to a point where I was just going to work, coming home and sleeping. All I could do was work and sleep. My boyfriend Terry was doing a PhD at the time, so he would have to cook me dinner, wake me up to eat it, and I’d go back to sleep again.”

After completing his PhD, Terry was offered a job as a software developer in Cambridge, “and he said ‘Why don’t you take some time off, and see if your ME gets better with relaxing?'” Aimee agreed, and the couple moved to the Fenland countryside just north of Ely in Autumn 2013, “but it’s not got any better,” she says. “If anything it’s got gradually worse.”

Aimee manages her condition with a strict ‘pacing’ regime, alternating physical and cognitive activities with plenty of rest throughout the day. The most active she gets is walking her adored (and very scruffy) rescue dog, Jingle, for exactly 14 minutes: “I’ve got a timer on my phone! I have to be strict with that because if I go over it, I get ill, and that means I’m pretty useless, really.

“It’s very frustrating. I’m a bit of a clean freak, I hate mess, so I’ve found it very hard to step back and say ‘No, I can’t do the cleaning today’.”

She also has to sleep for an hour-and-a-half every afternoon: “If I don’t, I get really bad headaches, and I can’t do anything all evening, so it’s quite important.” Then it’s bed by half nine, “unless I feel really ill, and then I go to bed whenever I feel like it.”

But one thing that keeps her going – even if she can only manage it in short stints spread through the day – is making her stunning needle-felt birds.

It all began three years ago when Aimee, who’s always been keen on arts and crafts, spotted a leaflet for a day’s needle-felting course. The leaflet featured a picture of a pretty hare, “and I thought ‘I have to learn to make this hare! I really badly want this hare!'”

She did the course, discovered she was a natural, “and I enjoyed it so much that I went home, went on eBay and bought the beginners kit,” she beams. “The first thing I made was a little mini Jingle, and then after that I thought ‘Ooh, what can I make?’ And birds seemed like the obvious thing.

“I’ve always loved birds,” she explains. “With my ME, I’d sometimes just sit and watch them on the feeder outside the window, and I became a bit addicted to watching them! Robins are my absolute favourite – they’ve just got so much character – so I thought I’d make a robin, and I was quite pleased with it.

“Then I gradually started making different types, and I had so many round the house that I was running out of places to put them. My boyfriend said ‘Have you ever thought about selling them?’ And I thought well, who would want to buy them?!”

Everybody, it turned out. Aimee joined a craft group, “and I took my needle felting along, and they all wanted me to make things for them. I just charged what I would’ve paid for the wool, so they started off at a fiver!

“I never thought about making money out of it at the time, but as I got more and more ill, and I was feeling a bit like ‘I’ve got no purpose to my life, just doing nothing all day’, I thought I’d put some on [handmade items website] Etsy. People started buying them, and it’s all grown up quite quickly.”

Each bird takes up to six hours to create, and although they look delightfully delicate, the making process is anything but: it involves Aimee repeatedly stabling fuzzy wool with a nasty-looking barbed needle.

“I don’t know the science behind it,” she says apologetically, “but somehow, as you stab, it hardens, and you can sculpt them into different shapes. I start with a base of white, and after I’ve got the shape I add the colour by stabbing it on top.”

She makes the (eye-poppingly realistic) legs and feet with painted wire and clay (“they’re quite intricate, but I’ve got the knack for it now”), and the eyes? “They’re just felt. It looks quite barbaric when you’re stabbing them in the eye! But the eyes are probably the most important part; you’ve got to get them right. Without the eyes they’ve got no life.”

At just £30 each, Aimee admits that she doesn’t make much money from her birds: “I probably wouldn’t be making minimum wage, but I don’t mind because I enjoy it. And I want them to be accessible to people,” she adds. “Needle-felted animals can be hundreds of pounds, but I want someone like me to be able to buy them. Someone who just loves them.”

The only problem is that, because of her illness, it takes Aimee time to complete each one. And sadly she doesn’t seem to be getting any better. “Quite a few things have happened that brought stress on, which makes it worse,” she explains. “Like my nana passed away, and my boyfriend had a stroke – you’d never know it, he’s totally fine now.” 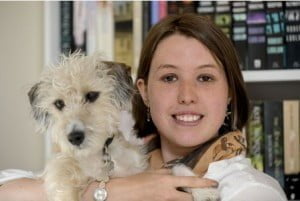 It happened after Terry had a car accident; he seemed to have escaped with nothing more than a sore neck, but a month later it was clear that something was seriously wrong. “He was in his office and I was in the lounge, and he shouted: ‘Aimee, my hands are going funny’, and he was banging his hands. I thought he was winding me up, but then I could tell from his voice that he was scared, so I said ‘Come through to the lounge and sit here for a minute’. But he didn’t get there – he just collapsed on the floor and started being sick, and his arms and legs on one side were flailing about. I thought he was going to die.”

Aimee rang 999; Terry was rushed to hospital, “and I think the adrenalin kept me going in that first week, because I was driving to see him every day. But after he got back and I was having to look after him, the stress just made it worse.” After three months Terry was able to start going back to work, “and I just sort of collapsed.”

Thought to be caused by a viral infection, there’s currently no treatment for ME, which affects patients in a variety of ways. “I hope I’ll get better, but everybody’s different,” she says. “I spent a fortune on homeopathy and it didn’t help; people recommend different diets and I’ve tried various things with no success.” People’s attitudes have been tough at times, too: “It’s really depressing because it’s as if you’re making it up,” says Aimee.

“I’ve had people saying I’m lazy; I had one doctor tell me I needed to lose weight and then I’d feel better – he said I should go to circuit training! But most people are understanding. My family have been really good, and my boyfriend’s been brilliant. I don’t know what I’d do without him, really.”

So what would her advice be to somebody with ME? “Try and stay positive. Get into a routine and do make sure you rest in between. Also I’d recommend getting a dog. Not a big dog that needs a lot of exercise, obviously, but the walking gets me out the house – otherwise I wouldn’t actually leave the house – and she’s great company for me,” she adds, ruffling Jingle’s scruffy head. “Even though she doesn’t talk, she’s always there for a cuddle.”

If and when she does recover, Aimee would love to go back to work, “but I’ll always want to make the birds now. I enjoy it, and it’s given me a sense of purpose – a bit of structure to my day, and something to aim for.

“It’s also created a community on Facebook of people that always comment on my work and say how good it is, so that’s boosted my confidence as well.

“Before I was so focused on the fact that I couldn’t work – I just wanted so desperately to work again, because I wasn’t seeing anybody, or doing anything. And although I can only do it for two hours a day, spread out through the day, I wake up in the morning knowing I’m making a bird today, and it just makes me feel so much happier.”

To see more of Aimee’s work, visit facebook.com/madebyaimeeuk, or etsy.com/uk/shop/MadeByAimeeUK.