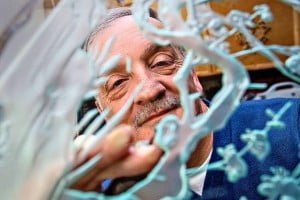 When Tony Palmer was told he had myalgic encephalopathy — ME, or chronic fatigue syndrome — at the age of 52, the company he worked for decided to let him go. He went to the job centre and laid his cards on the table, only to be told he had little chance of finding work.

“It was quite disheartening. After so many years of developing a lot of skills in a lot of different jobs, I felt I had something to offer and the experts were essentially telling me: ‘You have no chance at all.’ ”

Mr Palmer, who turned 58 yesterday, realised that his only option was to become his own boss. Having spent decades in various jobs that required fine handwork, he decided to set up Crystal Mountain Glass in Basildon, Essex.

He cashed in his pension to buy specialist equipment and contacted Prime, the Prince of Wales’s charity that helps out-of-work people aged 50 and over to become entrepreneurs, for advice on how to start a business.

His company, which he runs from home to save on operating costs, specialises in glass and metal engraving, as well as sandblasting, making items such as awards. The business has proved a success and he has received orders from New Zealand, Australia, the Caribbean and North America and has made awards for clients including Transport for London and the Greater London Authority. He spends much of his time engraving retirement gifts.

“I’m working because I feel I want to. I’m not sure what I would I do if I had no purpose. If I didn’t have that I wouldn’t know what I would do.”

Mr Palmer is one of a growing number of “silver entrepreneurs”. Latest figures show that about 20 per cent of workers aged 50 and over are self-employed, 1.757 million of them, while the number of self-employed people aged 65 and over rocketed by 54 per cent between 2008 and 2012. Many people in this age group feel that they are not ready to retire, while others have to keep working for financial reasons.

The economic crisis has eroded the value of their pension and, unlike previous generations, many will have financially dependent parents, as well as having to pay their children’s university tuition fees.

Yet it is often difficult for older people to find roles. For that reason, the Prince of Wales set up his charity because he had been receiving letters from people in that age group desperate to work but unable to find a job because of their age. Prime has helped more than 25,000 over-50s to explore self-employment through free training courses, mentoring and networking.

Alastair Clegg, its new chief executive, said that it did not take much scratching of the surface to realise that unemployment among older people was a big problem that was largely “invisible and ignored”.

“Unemployment causes misery whatever age you are and the age discrimination that you start seeing once you’re over 50 is — literally — criminal. It’s shocking that there’s an entire generation of people of that age who are really struggling,” he said. “Our typical client will be somebody who’s done 20 or 30 years either with one or a small number or organisations and imagined that they would work up until the point where they would draw their pension.
“For one reason or another, almost always redundancy or downsizing, they have found themselves potentially a decade of more away from their pension without a job.

“A hundred job applications later you realise that there’s actually very little opportunity to get back into the workplace and self-employment suddenly seems like the only sensible solution.”