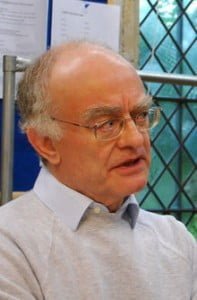 We are delighted to announce that the eminent British composer and conductor, John Rutter CBE, has accepted our invitation to become a new patron of The ME Association.

Mr Rutter, currently touring the country with a series of ‘John Rutter Singing Days’ in local churches, came to our note when he discussed his illness in a letter to The Spectator magazine.

“Rod Liddle may or may not be right that certain illnesses become fashionable once given a name and are illusory, as he wrote last week. But ME — myalgic encephalomyelitis, alias post-viral fatigue syndrome or yuppie flu, is not one of them. It’s an unpleasant physical illness: it ruined seven years of my life. It probably takes a number of forms, but in my case it started with chicken pox, caught off my infant son. I seemed to make a complete recovery until a year later, when I began to experience unpleasant symptoms. These included abnormal sensitivity to sound and light, violently inflamed eyes and blisters around the head and upper body. There was also nominal aphasia (problems recalling words). This is because the surfaces of the brain are inflamed. The mental fuzziness is compounded because the body can no longer process yeast properly.

“Like malaria, it cycles on and off, and after an attack, which might last a few days, I felt terrible. I would have a week or two feeling OK, then the cycle would begin again. I’m a professional musician, and we tend not to advertise our ailments any more than journalists do, but this was real. In the end, with an anti-yeast drug and a strict diet, the attacks grew milder and less frequent and life returned to ‘normal within limits’, but the memory remains of an awful period that was caused by a virus (identifiable by a blood test).

“Sorry to spoil a good polemic with facts that don’t fit.”

Mr Rutter has a long and distinguished career in British music and currently heads The Cambridge Singers, a professional chamber choir that is primarily dedicated to recording. He was appointed CBE in the 2007 New Year’s Honours for his services to music.