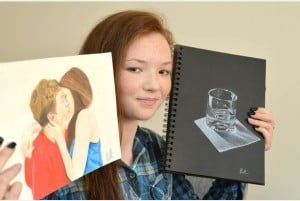 From The Gloucester Citizen, 27 August 2014 (Story by Laura Churchill).

TEENAGER Georgia Watkins became so ill at the age of just nine she spent years not being able to eat and drink herself.

But despite missing more than five years of school, the 15-year-old has managed to pass both her GCSE English and Maths, after just one week’s revision.

Georgia from Minsterworth was a pupil at Norton Church of England Primary School before she began suffering from constant tonsillitis for six months.

Aged just nine, she began suffering from chronic fatigue syndrome, also known as ME, and could barely get out of her bed.

Mum Justine said: “She had it severely and it ruined parts of her life. She was unable to do anything for herself; she could not eat or drink, and could not tolerate light or sound.

“She basically lived in her pyjamas in her room. Before that she was a health child that did cross country.”

She made a short recovery and went back to school for three months, when she was 13, but soon became ill again.

Georgia was eventually admitted to Great Ormond Street Hospital for a year and although her syndrome was then controlled, she suffered from depression.

She eventually returned to the Forest E-Act school last year, but only attended art classes, which she enjoyed.

It was suggested that Georgia, who turns 16 next week, attempted her GCSEs and with just one week’s revision she managed to pass both of them, getting D grades in both.

Her qualifications mean she has gained a place at Gloucestershire College studying photography, but she is unsure whether the writing and theory on the course may be too much for her.

Justine hopes instead someone would be willing to offer her daughter a chance as an apprentice or a job working as an artist or a photographer.

The mum, who has been living in Kingsway since February after he home was flooded, said: “She has done so well and I don’t know quite how.

“Her artwork has given her a way to express herself and she is very talented and has had some great feedback.

“She has missed out on a lot of her childhood and so did her younger sister because we had to look after Georgia a lot.

“But because she has always been around adults she is very mature and keen to start a career.

“We know she will always have ME and therefore will have her ups and downs, but we really want her to lead a normal life and she has learnt to get on with it.”

Georgia said she was pleaded with her grades considering how much she had missed school.

She said: “No one is ever going to be happy in that situation, but art gave me a way of expressing how I felt.

“I would rather get a career or apprenticeship rather than going to college.

“It will be the best situation for me if I could do something more practical and I am very driven.”