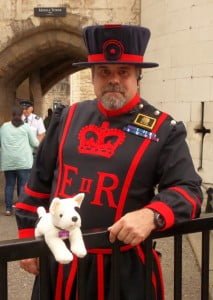 Foggy the Dog who is on a year-long mission to travel 1,000,000 miles round the world to raise £10,000 for the ME Association visited the Tower of London on Friday, August 8 – taking the distance travelled so far to 2,850 miles.

Foggy – the creation of MEA supporter Sally Callow, from Portsmouth – met up with a Yoeman Warder at one of the gates and then visited the moat where one of Sally’s friends, Yvonne O’Connell, was helping to plant ceramic poppies in the now famous display that commemorates the 100th anniversary of the outbreak of World War I.

In his regular blog, Foggy wrote:

“The day was exhausting; too hot, stifling, bustling, fast paced, loud and, although it wasn’t sunny, it was very bright. Call me Gizmo – remember? Bright light, bright light!! All of these factors are things that affect ME sufferers. Sally usually avoids London like the plague but….this was for Foggy and the poppies. Had to be done 🙂 But now, she is sat in bed trying to engage a brain cell – they all seem to have shrivelled and died tonight!”

Foggy’s first foreign visit will be to Turkey later this month when he is expected to notch up a 5,000-mile round trip.

His world tour is certainly grabbing people’s attention and support. At the time of writing, he had already raised £877.45 of the £10,000 target through his online fundraising page – that’s 8% of the total, with another 11 months of his world tour still to complete.

In this video, Sally explains all about Foggy and his world travel plans: