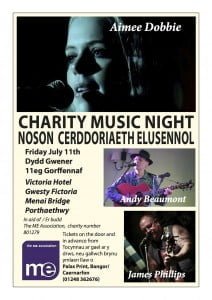 It will be lift off for the ‘Ball with no bounce’ at the Victoria Hotel, Menai Bridge, Anglesey, when local musician Andy Beaumont premieres his new song on Friday, July 11.

The song – an ode to ME sufferers and their carers – tells what it feels like to have ME (Myalgic Encephalopathy). And Andy should know as his wife, Kate, has had the illness for 18 years.

Kate was forced to give up a promising career as a research biologist after she went down with the illness, which blights the lives of 250,000 adults and children in the UK. She is now mostly bed-bound, unable to speak and can only eat chopped-up, softened food or smoothies.

She has extreme ‘brain-fog’ and distress and is unable to watch TV, listen to the radio or read more than a few words at a time. Andy – a retired marine scientist at Bangor University – is her full-time carer.

“For too long, psychiatrists and psychologists have taken the lion’s share of ME research funding but there’s now indisputable evidence that ME is a physical illness.”

His song describes vividly the daily frustrations, and exhaustion felt by ME sufferers.

Andy is the lead singer of local band The Scapegoats. But, at this gig in aid of the ME Association, he will perform a solo set based around American country blues and his own songs. Headlining will be singer-songwriter Aimee Dobbie from Trearddur Bay, Anglesey, with her band. Further support comes from singer-songriter James Phillips. The music begins at 8pm.

Neil Riley, Chairman of The ME Association, commented:

“Andy’s song hits the nail on the head! It perfectly and sincerely describes what it’s like to have ME. This is a physical illness – it’s not just ‘all in the mind’. We constantly push the boundaries to research the causes and hopefully find treatments.”

The song “Ball with no bounce” can be downloaded following a donation to Andy’s JustGiving page www.justgiving.com/ball-with-no-bounce. All proceeds will go to the ME Association.

Andy Beaumont is the lead singer of a locally well-known band – The Scapegoats – who have recently had a song from their CD featured on Craig K’s North Wales Musical Showcase. At this event, he will perform a solo set based around American country blues and his own songs.

Aimee Dobbie is an outstanding singer songwriter from Trearddur Bay, Anglesey. She plays covers on guitar and piano and composes her own songs, one of which has recently been featured by Adam Walton on BBC Radio Wales. Her style is influenced by a wide range of artists including; Bowie, Catatonia, Dylan, Nirvana, Radiohead, and old-time blues musicians. She will be supported by her own band.

James Phillips has years of experience as a musician who writes his own songs – and sings many other traditional songs – using a variety of stringed instruments. He is very well known in the locality and runs regular open-mic nights and gigs in various pubs and clubs in Bangor. He is an entertainer not to be missed!

The ME Association funds vital research into the underlying causes and treatment of ME/CFS and provides information and support to ME sufferers and their families.