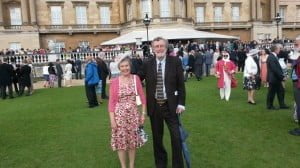 Dr Charles Shepherd and Mrs Mary Riley enjoy a break between the heavy showers at the Buckingham Palace garden party on Tuesday (June 3).

We had been invited to attend and we had hoped that Neil Riley, our chairman, would be able to join Charles and 8,000 other guests for one of the highlights of the London social calendar.

But Neil was not well enough to get along so Mary, sporting a rather splendid hat she had made herself, did the honours instead. She represented our chairman as well as the many thousands of carers of people with ME/CFS.

During the afternoon, Mary and Charles chatted with HRH The Duke of Kent, who is a Patron of The ME Association.

Daily Mail coverage of the event on Tuesday: