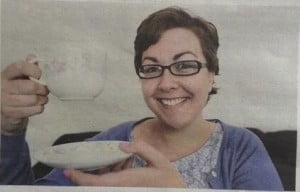 From the Stamford Mercury, 20 June 2014 (Story by Kerry Coupe – transcription, no weblink yet available).

A woman who battles an incurable illness has been put forward for an award for her work raising awareness and funds.

Anna Jones, 25, of Wothorpe, near Stamford, started Blue Sunday last year in a bid to raise money and awareness of the condition myalgic encephalomyelitis or ME.

The tea party started as Anna’s attempt to mark International ME Awareness Week. But she also ran a virtual event, so the friends she made through here online blog, but who are unable to travel because the condition is so debilitating, could join in.

Anna said: I’d count Blue Sunday as one of my greatest achievements to date.

“It was all so successful this year that the ME Association, my chosen charity, have now asked to adopt Blue Sunday as their own.

“There isn’t really anything like this yet for this illness and so it is a real milestone to have a fundraising event that all sufferers can get behind each year.

*I feel incredibly proud, but perhaps more dumbfounded by the response I’ve had for Blue Sunday.

“Like everything I do since being ill with ME, it has taken me a fair while to recover from the event but I feel it was well worth it.”

Anna was diagnosed with the condition in 2010, which is also known as chronic fatigue syndrome. There is no cure or treatment, other than symptom management.

But Anna, who is unable to work and relies on the help of her parents who she lives with, said one of the biggest challenges is the stigma that comes with the illness.

She said: “People assume we are merely tired and lazy and just need too pull ourselves together. They think ME isn’t a ‘real’ illness. I can assure them that is is; I’ve ‘lost’ nearly four years to fatigue, pain, dizziness, visual disturbances, neuralgia, weakness.”

The condition has had such a huge impact on Anna’s life that she was delighted to find out that a member of the ME Association fund-raising team had put her forward for a special recognition award from JustGiving.

She will find out today if she has been shortlisted and a ceremony will be held later this year, following a public vote.

Anna said: “It really is just an honour to be nominated. All I did was organise a tea party.”

Anna also writes a blog called ME, myself and I to help other sufferers feel less alone and to help people understand the complexities of the illness.

To read it, visit http://lifeintheslowlanewithme.blogspot.co.uk