In the Chris Baxter Show, reporter David Smith talks to Ally Reeve of Gloucestershire Fibro/ME Babes and Guys (yes, really!) about the problems with obtaining diagnosis and treatment, with further questions to Barbara Piranty, chief exec of Healthwatch Gloucestershire about her organisation’s role in being a public voice for health service improvement.

This section runs from 7.15 minutes into the programme to 20 minutes.

In the final section of the show between 2hrs 26 minutes and 2.45, Chris Baxter interviews ‘Jacqui’ who became so ill with fibromyalgia that she tried to take her own life. She then found Ally Reeve’s group, where she found the help and understanding which enabled her to have a different outlook on life.

The programme opened with snippets from Health Questions in the House of Commons this week when the chairman of the All Party Parliamentary Group on ME, Annette Brooke MP, spoke about the frequent difficulties encountered by patients when seeking a diagnosis from their GPs.

The ‘Listen Again’ facility will be available for seven days from the broadcast. 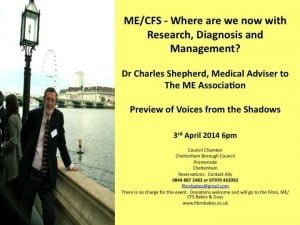 Ally Reeves’ group will host a talk by MEA medical adviser Dr Charles Shepherd on Thursday April 3 and the end of April will see the return of international fibromyalgia expert Dr Andrew Holman, from Seattle.